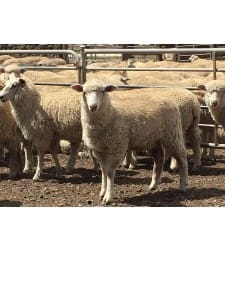 First cross Border Leicester/Merino ewe hoggets met heavy buyer interest to average $152 and range from $135.50-$161. A number of lines of young White Dorper ewe hoggets made from $94-$146.50. The top-priced lot was some 9-10 month-old ewes from Conargo NSW, which were joined to White Dorper rams. A line of 18 month-old unjoined Cashmore Park ewes, 58kg lwt, from Hamilton in Victoria made $156.

The NLRS said lamb quality was good across all grades, with the heavy weights showing top condition. Mainly heavy lambs were penned along with a limited number of trade weights. Store lambs were well-supplied and all the usual buyers operated. Competition improved as the sale progressed resulting in a dearer market.

Mutton numbers were steady and quality was good with some larger sheep penned. Heavy first cross ewes were $12-$15dearer and averaged $90 or 300c/kg cwt. Heavy wethers sold to $100 or over 300c/kg cwt.

The NLRS said lamb quality was similar to previous sales. There was a good selection of well-finished lambs, along with the plainer types. Heavy and extra heavy lambs were well-supplied. The usual buyers competed strongly in a dearer market.

The last NLRS-reported Shepparton sheep and lamb sale until further notice was attended by the usual buyers. Quality overall was mixed, but one agent had an excellent lane of heavy and extra heavy weight lambs from 25-33kg cwt. These lambs sold $8-$10 higher than last week, while the small supply of trade weights were unchanged to dearer.