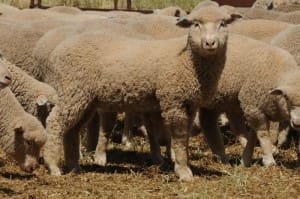 NEW season trade lamb prices were firm to dearer in most eastern states saleyards this week, except at Dublin in South Australia and at Bendigo in Victoria.

A smaller lower quality lamb yarding was offered at Bendigo the day before the Melbourne Cup. A Dublin, despite a generally good quality yarding, several trade and processor buyers, including supermarkets, did not compete and skin values were discounted.

In Western Australia at Muchea, store lamb prices slumped $3-$5 in a yarding dominated by unfinished lines.

The National Livestock Reporting Service quoted lamb and mutton over-the-hook indicators in New South Wales as firming this week, to remain higher than in Victoria and South Australia. Rainfall over the weekend and forecast into the week may impact supply.

In Victoria, the NLRS said there were some downward adjustments to lamb over-the-hook indicators this week, with trade and heavy weight categories back an average of 20c/kg cwt. Light and medium weight mutton indicators lifted slightly, with medium weights averaging 295c/kg cwt

The mutton ESDI closed up 1 cent on 326c/kg and the national indicator improved 2 cents to 328c/kg.

The NLRS said following weekend rain numbers were back on the expected draw. The fair quality yarding had a reasonable selection of trade weight lambs and Merinos, and odd pens of heavy weights.

The NLRS said it was a rain-reduced penning of very mixed quality lambs. There was a limited number of well-finished lambs and a large percentage of plain condition Merino lambs. The usual buyers attended, with some extra competition.

Demand outweighed supply and lambs trended dearer, with trade weight young lambs up $5-$6. Prices for heavy young lambs lifted more, but quality was down. Old lambs also sold to a dearer trend, with heavy weights $10-$12 dearer with a lift in quality. There were quality related price changes in a firm to dearer sheep market.

The NLRS said lamb quality was very mixed. There were some handy lines of well-finished lambs, but more drafts showing signs of dryness and seed contamination. Most of the usual buyers competed in a market that varied around quality. New season lambs sold to restockers for $70-$114. Light lambs ranged from $100-$106. Trade weights were fairly firm at $113-$131. Heavy lambs held firm to $2 dearer at $130-$148. Carcase prices ranged from 504-525c/kg cwt.

Mutton quality was fair. Some good lines of heavy sheep were offered and prices lifted. Merino ewes sold from $73-$132. Crossbred ewes made $74-$112. Some handy lines of Merino wethers sold from $85-$131.

The NLRS said the Melbourne Cup holiday was suggested as the reason for the sharp decline in the lamb yarding. Quality remained mixed, with only a small percentage of the yarding displaying good weight and cover. All the usual buyers attended, but some just watched the sale.

The market fluctuated with the limited pens of quality slaughter lambs holding their value the best, while plentiful supplies of plainer conditioned trade and light trade weight lambs resulted in some of these categories being discounted.

Overall prices for young lambs sold to slaughter averaged $3-$5 easier. Store lambs were also cheaper compared to the strong prices of the previous sale. The market reached a top of $140 for export weight young lambs estimated at about 28kg cwt. The supply of heavy lambs remained limited with just one sale at $140, followed by about a dozen pens of young lambs at an estimated 25-26kg cwt that made $130-$134.

Apart from a few lines of Merino wethers in one agent’s sale, most sheep were offered in smaller and mixed pen lots. Prices were mostly firm to a few dollars dearer than last week, with the exception of very plain and lightweight ewes which averaged cheaper, down to $23. Merino ewes in a big skin sold to $95. Heavy shorn Merino wethers sold to $92 and heavy crossbred ewes made $83-$90. The good quality slaughter sheep were estimated to cost processors from 280-320c/kg cwt.

At the South Australian Livestock Exchange at Dublin on Tuesday, the agents yarded 6995 lambs, 1609 fewer than last week, and 1959 sheep, 1 less.

The NLRS said despite a generally better quality yarding of crossbred and Merino lambs being offered, prices eased. All of the usual trade and processor buyers attended. However, several failed to participate and there was no supermarket input.

Feeders and restockers were prominent and the easing prices enabled some judicious buyers to buy heavier crossbred lambs. However, light weight lambs attracted the most competition and prices for these lifted. Ultra-light weight 2 score crossbred lambs sold to feeders made $69-$97, light weights lifted $6 to up to $90 and trade weight 3 scores ranged from $89-$102.

The NLRS said lamb quality was again mixed. Some excellent heavy lambs came forward. However, there was a large number of lightweight store lambs lacking weight and showing signs of dryness in the skin. The large array of trade and processor buyers were again strong, but not all were fully active. There were fewer restocker buyers. Lightweight lambs were lower in price, heavier lambs dearer.

The NLRS said the lamb yarding was dominated by unfinished lines.

Prices for medium and light weight mutton and store lambs eased $3-$5. Lambs suitable to the trade retained their value, with heavy weights making $103-$111. Trade weights made $82-$102 and air freight types sold from $65-$88. Restockers were active on light crossbred lambs at $30-$70.