Ewes are backlined for lice at Goodooga before being trucked to their home property in the Broken Hill region.

SHEEP from the Broken Hill district on both sides of the South Australian-New South Wales border are returning home to green feed following a six-month agistment on the plains and outer slopes of north-west NSW.

About 25,000 mostly pregnant merino ewes were sent away in April and are returning with progeny to help rebuild sheep numbers and farm cash flows affected by drought.

Elders Broken Hill manager Nick Williamson said the branch had worked with half a dozen clients to place sheep and cattle from drought-hit properties in the region on to NSW pasture country.

“Around 20-25,000 Broken Hill district ewes began trucking in April to good feed in the Goodooga-Lightning Ridge area and to country around Nyngan, Narromine, Dubbo in the NSW central western region,” Mr Williamson said.

“A small number of cattle and significant numbers of sheep also made their way to the South East of South Australia.” 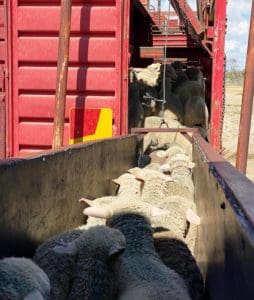 Ewe lambs born on agistment in Goodooga are trucked to a nearby property for crutching and backlining prior to the trip home to South Australia.

Mr Williamson said all the agisted ewes and their progeny are returning home to begin the drought recovery, bar one mob of wether lambs, which will stay on in north-west NSW as its grazing incomes switch from agistment to wool growing.

“The task of trucking sheep back…should be completed by the end of the month.”

Cattle sent away on agistment have not returned, selling instead into eastern Australia’s buoyant restocker market as the most commercially attractive option for their owners.

Factors driving the sheep equation tipped the scales in favour of keeping breeders and wethers in hand. The drought is breaking very slowly in SA’s north-east pastoral district, and along the NSW-SA border from north of Broken Hill to Wentworth at the junction of the Darling and Murray rivers.

These arid regions typically receive 200-275 millimetres of annual rainfall, but registrations at most properties were a fraction of that in the three years to June 2020. The result was the fiercest drought in living memory.

Properties which had drastically reduced flocks, or were completely destocked, kept missing the rain which started falling over most other parts of SA and NSW early this year. That changed last month, when around 50-100 millimetres of rain fell in most paddocks, followed by around 15-30mm this month. Native pastures have responded spectacularly, and most dams are now full or filling. 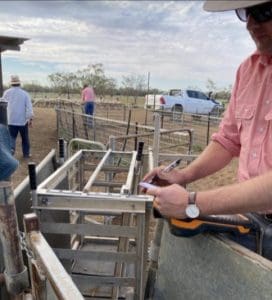 With a ewe gestating in around half the time of a cow, she’s quick to lamb and her progeny rapidly generates its own return.

On good feed a lamb at four months of age might weigh about 20kg, and would be worth $80-100. A different environment and unfamiliar husbandry adds risk to equation, particularly because management from a distance of 1000km is fraught, and reaction time is necessarily slow.

Risk of fly strike rises rapidly after rain amid warming temperatures and humid conditions, which can further stress animals. Therefore, most sheep were shorn or crutched and treated with a fly-protectant product while on agistment.

One-way freight costs about $10 per head on the journey of 800-1000 kilometres. The standard agistment fee is $1 per ewe and a margin per lamb, and is calculated weekly. The investment in sending ewes away on agistment appears to be a wise one, as store sheep prices really on unflagging restocker demand.