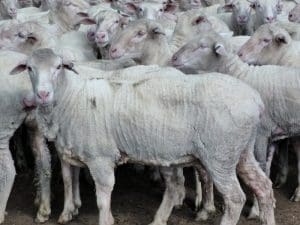 RAIN across Australia helped boost AuctionsPlus sheep and lamb listings to 91,290 last week, up just over 9000 more than the previous week.

Clearance rates stayed steady at 89 percent in one of AuctionPlus’ largest online yardings for the year.

Young and proven Merino breeders were in tighter supply this week, selling from $120 to $217, for an average of $179. The Kilcoolin Pastoral Company at Euroa in Victoria was paid $217 for 805 unjoined 2.5 year-old mid-February shorn ewes that were also part of their complete flock dispersal. The mostly score 3 ewes weighed 58.1kg lwt.

Merino wether lambs were a focus for buyers in last week’s auctions, with little to no hoggets or grown wethers on offer. Wether lambs averaged $99, selling from $60 to $131.50. The top price was paid for a line of large framed Lines-Gum Hill blood wethers from Coomandook, South Australia. The 6-7 month-old lambs weighed 49kg lwt had a half centimetre skin and were bought by a processor.