Rain and quality helps hold lamb and ewe values up 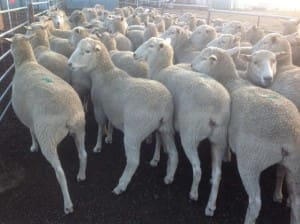 “All of these were scanned in lamb to Poll Dorset rams.”

Ms Adams said 62kg lwt first cross ewe hoggets from the same vendor, scanned in lamb 152 percent to White Suffolk rams topped the sale at $224. These were were offered by JM Ellis and Co for client Ken Handreck. The only line of first cross ewe lambs available made $140. These were 9-10 month olds from Trangie NSW.

Ms Adams said prices increased for the larger offering of Merino wethers this week. Wether hoggets ranged from $53.50-$83, with an average of $66.70. The top-priced line was a line of Wanganella blood wethers, with a 2cm skin from Deniliquin NSW. Grown Merino wethers made from $68.50-$70.50.

The NLRS said lamb quality was fair with good numbers of well-finished lambs. Most were heavy and extra heavyweight lambs. The usual buyers competed in a market that was fairly similar to the previous sale a fortnight ago.

The NLRS said the yarding eased from the sale two weeks ago as good rainfall was received over the Easter break. Quality was good over the yarding.

The NLRS said the yarding increased for the first post-Easter sale. Dry conditions across the Goulburn Valley and higher prices at saleyards in recent days also prompted more farmers to sell.

The market was dearer by $5-$12 when compared to a fortnight ago. There was a bigger field of meat processors competing, due in part to the bigger lamb numbers.

The market reached a top of $180.50 for a small pen of extra heavy export lambs. Lightweight lambs to slaughter sold strongly at $88-$96 for the better quality pens, which still showed reasonable fat cover. Very small and secondary lambs made from $47-$60. Local agents did pay to $108.50 for a pen of bigger-framed store lambs, but store competition was limited.

The market remained patchy on plainer trade lambs which lacked finish and these lambs generally sold from $100-$116. Well-bred and finished lambs sold to the strongest and most consistent bidding, with the best domestic weight lines selling from $122-$136.

The lead pens of heavy export lambs sold from $150-$165, with only a few pens of extra heavy lambs exceeding this and making up to $180.50. On a carcase basis the majority of quality slaughter lambs ranged from 530-550c/kg cwt.

The mutton market was dearer, with heavy crossbred ewes selling from $100-$118, and heavy Merinos to $95. The general run of medium and lighter weight slaughter ewes sold from $65-$86. The better quality mutton sheep were estimated to return 330-350c/kg cwt.