“PLAY what’s in front of you” was the advice of the 2017 trans-Tasman Rabobank Leadership Award winner David Crombie in Melbourne last night.

Responding to a question from 2017 Rabobank Emerging Leader Award winner, organic farmer Nathan Free, Mr Crombie said told about 300 food and agribusiness stakeholders it was hard to reflect on whether he could have done anything better.

“I think what you do is you play what’s in front of you.

“I think when you are developing your career the most important thing is to ask questions,” he said.

“If you make a mistake tell someone – I think that’s a golden rule; don’t try to hide it and fix it, tell someone.

“Just be confident in what you are doing, get the best information that you can and just go for it.” 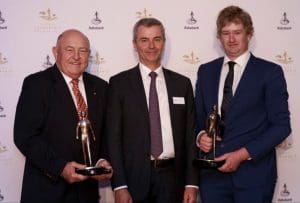 Mr Knoblanche said the breadth of Mr Crombie’s contribution to Australia’s agricultural sector and the wider community over the past four decades was “truly awe inspiring”. He said David Crombie has more than 40 years of commercial and representational experience in agriculture, much of this spent at the highest level, at the helm of both industry organisations and business enterprises.

“Australian agriculture has indeed been fortunate to have such an outstanding and tireless ambassador, who is held in such high regard both in and outside the sector”.

“At the same time, David has been a very successful business leader in his own right,” he said.

“And with all of this, he has also always been extremely generous with his time, in particular when it comes to mentoring and fostering others within the sector.”

Mr Crombie is a fifth generation cattle producer from south-east Queensland. He served as National Farmers Federation president from 2006 to 2010, as chairman of Meat & Livestock Australia from 1998 to 2005 and Meat Standards Australia 1996-1998.

“During David’s tenure at Meat and Livestock Australia, he played a seminal role in building the meat industry’s reputation and skills at a crucial time in its development and driving change in the sector,” Mr Knoblanche said.

“Within the meat industry, he was the chief protagonist for Meat Standards Australia, the world’s gold standard for meat tenderness and consistency, and the NLIS (National Livestock Identification System).”

Mr Crombie was a Commissioner of the Australian Centre for International Agricultural Research and served as Australian co-chair of the IndoBeef program – a collaborative research initiative established between the Australian and Indonesian Governments to strengthen Indonesia’s community-based beef sector and improve the livelihoods of Indonesia’s rural poor. He has also been closely involved in a number of organisations which support agriculture more broadly, including the Australian Rural Leadership Foundation, which he chaired from 2000 to 2008.

In addition to running his own farming enterprises, David Crombie was a founding partner of international development company GRM International — now Palladium — and served as managing director until 2000 and is now a director. He sits on the boards of listed companies – Australian Agricultural Company, Alliance Aviation Services and Barrack St Investments.

Mr Knoblanche said in recent years Mr Crombie had been a passionate advocate for the opening up of Australia’s north for agriculture and has participated in the Federal Government’s Land and Water and Infrastructure Task Forces and contributed in the lead-up to the new Cooperative Research Centre for Northern Australia.

Outside of agribusiness, Mr Knoblanche said, David Crombie had also demonstrated exceptional leadership in “his other great passion – sport, and, in particular, rugby” as a former Queensland player and a Wallaby. He went on to be chair and president of the Queensland Rugby Union, a board member and Australian Rugby Union president. In 2014, Mr Crombie was made a Member of the Order of Australia for his services to agriculture, communities and sport.

Still a bit of tread in Crombie’s sandshoes

After accepting the award, Mr Crombie said he wouldn’t have done anything differently.

“I think I’ve sort of fallen into things and when you are confronted by situations you look at the facts and you think what would be the sensible thing to do here, to move this forward to achieve a particular outcome,” he said.

“I think if you confident in your ability to pull people together and to move forward; that’s the way I’ve lived my life and I would never have predicted  that I would be standing here.

“I would never have predicted that I would have been at the National Farmers Federation or Meat & Livestock Australia.”

Mr Crombie said when he left school his intention was to go jackarooing around Longreach.

“Well, my wise mother said: ‘No, I would like you to go to university for one year, just go and have fun and see what you think.

“Well I failed, I played a lot of rugby, I managed to somehow to hang onto my scholarship, I completed my degree and so my life just bumbled on from there,” he said.

“I haven’t planned my life at all.

“I’ve enjoyed every minute and there is still a bit of tread on the sandshoes.”