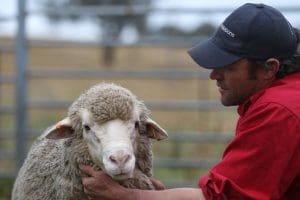 RESEARCH showing that sheep shorn more frequently have lower stress levels has been welcomed by Merino growers shearing more than once a year.

Dr Edward Narayan from UQ’s School of Agriculture and Food Science and the Queensland Alliance for Agriculture and Food Innovation (QAAFI), said the research found Merino ewes sheared twice during pregnancy, rather than the industry standard of once, fared significantly better.

“There’s been anecdotal evidence that shearing ewes early in their pregnancy resulted in higher wool productivity, but we wanted to see how it affected the animal.

“While shearing is an acutely stressful activity for the animal, our study reveals that it significantly reduces the ewe’s long-term stress,” Dr Narayan said.

“The evidence was in the wool itself.”

Stress hormones present in wool samples were analysed at UQ’s Stress Lab for Comparative Physiology and Endocrinology and used to calculate and compare animal stress over time.

“The hormone is incorporated into the wool through the blood vessels at a slow pace, and this reflects the stress that the sheep goes through on a farm.

“Testing long-term changes in cortisol in sheep is much easier and less invasive than collecting blood or faeces.

“After analysing our samples it was immediately clear that pregnant ewes sheared twice had significantly lower cortisol levels in their wool over time.

Mumblebone Merinos principal Chad Taylor said the research fits what he is seeing in his sheep that are being shorn every six months in an on-property trial co-ordinated by the University of New England.

“That was really accentuated when they were shorn twice a year for the second year,” he said.

“It’s a wonderful thing this six-monthly shearing, but if the wool is not long enough in six months, it doesn’t justify it economically.”

He said Mumblebone had fast-tracked to elimination of skin wrinkle from the flock, which accentuated staple length and facilitates six-monthly shearing.

Selection of sheep to justify six-monthly shearing and its associated benefits also meant lower stress levels for the producers.

“We do it for the staple length and for welfare, because over summer we don’t want to get any flystrike.”

Dr Narayan said farmers should take note that reducing the amount of cortisol in their sheep means reduced instances of a suppressed immune function, reproductive failure, emaciation and poor quality production output, such as dark-cutting meat or reduced wool quality.

“We were lucky enough to use collared smart tag technology to track the activity of the sheep,” Dr Narayan said.

“This revealed much more active animals, grazing and socialising much more than the control group.

“And by analysing wool microns of these ewe’s lambs, we found that they had finer wool microns and better quality comfort scores – their wool was simply more valuable.

“This is a win-win for farmers and sheep, and we’re hoping that this practice will become standard across the industry.”

This research was funded by Australian Wool Innovation and is published in an industry report available in the UQ library e-space.