THE Carbon Market Institute (CMI) has today launched its inaugural Carbon Farming Scorecard report, with its analysis of Australia’s carbon farming policy frameworks finding Queensland as the best jurisdiction for the industry.

The report found that while Australia has strong frameworks able to foster a world-leading industry, there is a need for greater policy ambition and leadership, as well as an ongoing focus on integrity and stronger alignment with private finance.

Overall, Queensland (80 percent) was the standout jurisdiction in acknowledging the significant role carbon farming can play in delivering the state’s environmental commitments, including emissions reduction.

It also demonstrated strong progress in prioritising the resources required to build market capacity, implement strong policy, and acknowledged the importance of integrating environmental, agricultural productivity, and social co-benefits for Indigenous and other regional communities.

The report acknowledges that Queensland, like other states, leverages the decade-old federal framework for verifying and crediting carbon farming and other emission reduction and removal activities, under the Emission Reduction Fund (ERF). 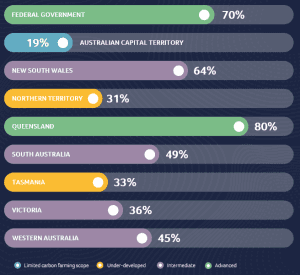 The Federal Government (70pc) was recognised for developing this world leading regulatory and legislative framework first initiated in 2011; however, recent market interventions and limited overall ambition within the broader climate policy suite impacted its score.

The report noted recent trials and explorations of innovations in relation to environmental co-benefits as well as market exchanges and capacity-building which could further strengthen scores in 2023. However, it highlighted the need to deliver and expand on these, improve data management and reporting, as well as build investor and community confidence through ongoing transparency and reviews.

New South Wales (64pc) also scored relatively strongly following its recent $125m commitment to its Primary Industries Productivity and Abatement Program, which will see carbon farming play an important role in the state’s ambitious emissions reduction targets of 50pc by 2030. However, the report notes that the state’s progression is still in its early stages, and requires further development and recognition of co-benefits, training and education resources and links to private investment.

“Despite challenges over the last decade, as well as recent scrutiny of carbon crediting and impactful policy interventions, the report identifies land-based solutions as a critical element of almost every Government’s net zero strategy,” CMI CEO John Connor said.

“While there is rightly a focus on integrity, ambition and support for landholders, our 6th Carbon Farming Industry Forum highlighted political support across the spectrum for carbon farming as a contribution to national emission reduction and removal activities to achieve net-zero and for some net-negative emissions.

“We commend the higher-performing jurisdictions in raising the bar with some substantial policies in place across the country, as well as acknowledging the role of the federal government in building a strong platform for the industry over the last decade,” he said.

“However, we are at a critical juncture where this framework needs to be scaled up and rejuvenated to chart a more ambitious path and link them to the required scale and urgency of industrial decarbonisation policies.

“Overall, the scorecard illustrates the unique opportunity for Australia’s carbon farming sector to play a key role in driving down emissions, supporting climate repair and resilience, and generating jobs, revenues and other co-benefits for communities across the country.”

Of the other states and territories, the report found that South Australia (49pc) and Western Australia (45pc) have both developed carbon farming policies and assessed opportunities in their state. However, SA’s well-established Blue Carbon Strategy and more sophisticated government engagement afforded a higher score, with WA still grappling with legislative barriers preventing projects from being undertaken.

Victoria (36pc) has also announced a series of carbon farming initiatives and policies, which are still in the early stages of implementation and yet to provide further details on the practicalities of its Carbon Farming Program, among other initiatives.

While the Northern Territory (31pc) has a history of carbon farming through collaboration with Aboriginal Traditional Owners, particularly focusing on savanna burning projects, and Tasmania (33pc) is progressing its industry through direct funding and awareness-raising initiatives, both still have under-developed policy frameworks.

It should be noted that while the Australian Capital Territory (ACT) is supportive of carbon farming, its geographic size and limitations, and emissions profile means carbon farming has appropriately not been a key strategy for the jurisdiction to date.

The Carbon Farming Scorecard report was developed with KPMG’s support as research partner, and comprises 12 criteria against which Australia’s federal and state and territory governments have been assessed, and are grouped under the Carbon Farming Industry Roadmap’s  four critical pillars for industry development: “Optimising Policy Frameworks and Market Design; Unlocking Finance and Investment; Quantifying Co-benefits and Creating New Markets, and; Communicating Benefits and Building Capacity”.