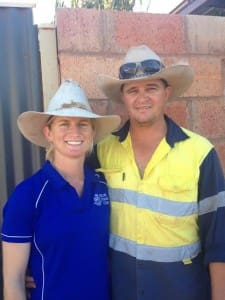 It was a year ago, in the grip of one of the worst droughts in history, that south western Queensland sheep producers Bob and Amy Brown decided urgent action was needed.

This story outlines their decision to build a feedlot on their 12,000ha grazing property to save the lives of 1300 Merino lambs.

The Browns’ own ‘Heather’, a grazing property near Bollon, where in a good season they run Merino sheep as part of a breeding and wool production business, along with Charbray cattle.

When the drought escalated in 2013 they were forced to reduce their ewe numbers from 6000 to 3000. As the dry continued they were left in tough situation: how to keep their lambs alive. Bare paddocks and struggling ewes meant they had few options.

They could do nothing and risk losing their lambs. If 80 percent died at an average value of $50 a head they would be down $52,000. Or they could sell lambs for $15 a head on a subdued market and face the possibility of having to buy back replacement stock when the season improved for an average-sale price of $65.

Putting the young animals into a commercial sheep feedlot wasn’t an option: every one they called was at capacity. Besides they worried that even if space became available shifting the young animals would involve trucking costs and they were concerned the lambs would not get the specialist care they needed in a feedlot.

So the Browns made the decision to wean early – some lambs were just five weeks old – and build an on-farm feedlot so they could keep the young animals alive.

“In hindsight, we know now if the lambs hadn’t been early weaned into the feedlot most of them would have died,” Mr Brown said.

While the concept was new to the couple, they had been to Leading Sheep’s John Milton workshop ‘Nutritional Management of Merino’s for Optimum Reproduction’ in 2013 and the session had offered them some valuable insights.

“The early weaning of lambs was a new strategy of us,” Mr Brown said.

“Basically we adopted it so we could maintain sheep numbers if the season broke and wouldn’t need to buy in replacement stock at high prices.”

“The cost of early weaning the lambs on the feedlot for eight weeks was $8.60 per head in total, including feedlot set up, feed and vaccinations,” Mrs Brown said.

Lambs came out of feedlot with good weight for age

Fortunately the rain gods were shining on the couple and a season break meant the lambs were on feed for just six weeks.

“We were able to release lambs back into the paddock in February, because it had rained,” she said.

The wether lamb portion was then sold in May for $70.50 per head.

The experienced western Queensland producer said the lambs came out of the feedlot with good weight for age and their stomachs were developed to handle roughage in the paddock.

“These lambs were then set for life – they are expected to be more fertile and have better staple length than if they hadn’t been fed.

“In addition, supplementary feeding will be easy in the future because flock is now trained in the process,” he said.

“To put this in perspective, the lambs from the year before were not fed and did it very tough in drought conditions.

“At the moment they average 35kg, at 12 months older than the feedlot lambs,” he said.

“The lambs that were in the feedlot weigh 36kg so are 12 months ahead.”

Mr Brown said the early weaning of the lambs also had big benefits for the ewes, including better survival rates in drought conditions and time to recover for joining.

“The program was very successful and will be done again if required,” Mr Brown said.

Feed cost was 60 cents a lamb per week 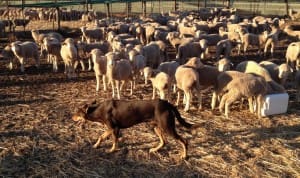 The feed equated to 60 cents a head a week and drenches and vaccine amounted to $1.50 per head.

“In hindsight, we would have given the lambs their vitamin A, D & E injection when they first went in rather than halfway through their time in the feedlot, which may have prevented some eye problems later on.

“Lack of vitamin A is directly related to pink eye, which went through all the lambs. Lambs with sore eyes were treated with pink eye spray once a day. It was successful as they all recovered.”

He said there were a maximum of 300 lambs in one pen.

“We had approximately 1pc death rate which is normal in intensive feedlotting,” Mr Brown said.

“We achieved positive results during a drought when there were limited options.

“Successful early weaning of lambs in Queensland is rare but with good nutritional advice it’s possible for producers looking for other options.”

Feedlot was set up in existing sheepyards 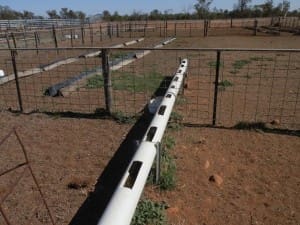 The Brown’s lamb feedlot was set up in existing sheep yards. Water was installed using PVC pipes with floats, feed troughs were made out of poly belt screwed to logs and hay containment was made by bending reinforcement mesh to the shape of the hay bales.

Lick was distributed in 20 litre drums with the tops cut out. The ration was designed for the Browns by consultant John Milton.

It wasn’t intended to fatten the lambs, but only to grow them out. They were fed barley straw hay ad lib, sheep lick mixed with Soya bean meal, and pellets. Pellets were Riverina New England Starter pellets and the lick was custom made from Stock Lick in Roma.

“This worked well because the lambs picked up on eating pellets straight away which is generally where people have trouble,” Mr Brown said.

“Plenty of trough space was also available with long troughs side by side. The lambs were already familiar with the lick as it was fed when they were on their mothers in the paddock.

“All up we spent approximately one and a half hours each day looking after the lambs.”

– Draft the weaker lambs away from the bigger stronger ones and put them in their own pen together. This way they are less likely to be pushed over at the feed troughs.

– Be very careful with feeding Soya bean meal as it can kill lambs very quickly. It must be introduced very slowly with no sudden changes made to the lick to Soya bean meal ration.

– Most deaths will occur during the first week the lambs are in the feedlot. It is important to feed good quality Lucerne hay and chaff during this time to encourage the lambs onto feed as soon as possible. We also found that giving them a vitamin A, D & E injection helped to pick them up, plus prevent eye problems caused from the dust and intensive feedlot situation.

– A blower vac makes light work of cleaning out the troughs before feeding time.

– It is a must to vaccinate the lambs with 6-in-1, especially for pulpy kidney. It is preferable to do this before they go into the feedlot, as pulpy kidney can be a major cause of deaths.

– Other people considering lot feeding sheep on their property need to check that they are meeting the relevant legislation (state and local) depending on the number of sheep they are feeding.

This story originally appeared in the Rural Weekly