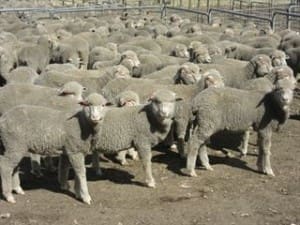 Demand was firm for quality trade lambs in saleyards on Friday, but at prices kept under 480c/kg by processors.

Light and restocking lambs continued to be in strong demand in saleyards and on AuctionsPlus, even though processor forward contract orders were filled earlier in the week.

The national restocker lamb indicator also again reflected the strong demand for lambs to go back to the paddock, lifting 10 cents on Friday to close on 491c/kg cwt. The other lamb indicators were: Merino 393c/kg, up four cents; light 445c/kg, up one cent; trade 461c/kg, down two cents, and; heavy 456c/kg, down two cents.  The national mutton indicator closed unchanged last Friday on 298c/kg cwt.

AuctionsPlus market operations officer Anna Adams said Merino ewes approaching joinable age continued to sell well, this week making from $63 to $152, with only one line selling for less than $100. The top price was for 15-month-old Gumhill blood ewes out of SA, closely followed by Bundilla blood 14 month-olds out of the Riverina selling for $151. Old unjoined ewes made $80 to $85, she said.
The only mutton sales for the week were in Tasmania with prices ranging from 286c/kg-292c/kg cwt for recently shorn lines, with processors outpriced by restockers in mainland sales on the limited number of suitable sheep.
Merino wether offerings increased this week with lamb prices steady. 2014 drop lambs sold from $52 to a top of $85 for Narcoota blood unshorn April-May drop lambs weighing 47kg. In the Watervalley Merino lamb sale, lines of wether lambs, 19-27kg, sold for $42-$51.50.

The NLRS said the quality of the 14,500 new season lambs penned was fair, though there were more store lambs offered. The usual buyers competed in a cheaper market.

The sheep were mostly Merinos and quality was similar to previous sales. Prices eased slightly, with Merino ewes selling from $71-$111. Crossbred ewes ranged from $64-$92.

Griffith agent Don Barbaro said the quality was not in all the lambs yarded on Friday, but restocker inquiry was strong from traders punting on good prices for lambs later in the year.

“It could work out alright for them, but you never know,” he said.

With several areas of NSW suffering from the dry season, there have been a “fair number” of lambs already through saleyards, and producers are less able to hold lambs over into the New Year, he said.

Mutton quality up at Cowra

The NLRS said the very good quality lamb yarding had plenty of finish across all grades. There were mainly trade and heavy weights penned, with the majority being new seasons. There was an increased supply of store lambs suitable for restockers and all the usual buyers operated. Demand was weaker, except for the trade and lighter end which held close to firm.

In Victoria at the Shepparton saleyards on Friday, the agents yarded 5615 lambs, 735 fewer than last week, and 900 sheep, 50 more.

The NLRS said quality over the yarding was mixed, but the new season lambs were generally good. The regular trade buyers and an additional lamb restocker operated. Prices remained firm for most sheep and the plain to average quality lambs, but were up to $5 dearer for better quality trade weight lambs.