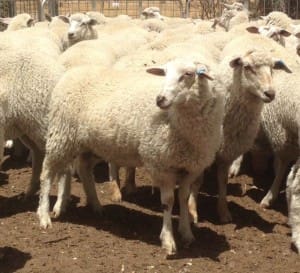 Western Australia’s OTH rates were not available when this article was published.

The ESDI for mutton was unchanged at 327c/kg and the national indicator was firm on 326c/kg.

The NLRS said it was a very mixed yarding with some outstanding heavy weight lambs and only limited numbers of trade weights. Most of the regular buyers operated in a solid market.

The NLRS said lamb quality continues to be mixed. There was an improved offering of heavy and extra heavy lambs and some plainer types. The usual buyers competed in a fairly steady market.

The NLRS said the focus shifted to shorn lambs for the first time this season. Most agents led their sales with shorn lambs as the quality of young lamb drafts continued to deteriorate.

There was little price movement on export lambs. However, the market showed a stronger trend, particularly for well-finished shorn lambs weighing over 22kg cwt which were $6-$10 dearer. Bidding was more selective on young longer wool lambs, although most trade weight categories averaged $2-$5 dearer. The market reached a top of $150 for a small pen lot of heavy export lambs.

Demand was strongest for the best presented trade and heavy trade lambs. Most of the lead pens of lambs in the 24-26kg cwt range sold from $132-$145, and the 22-24kg types from $120-$130. The general run of domestic lambs sold from $105-$108. The best quality shorn lambs recorded averages of 520-545c/kg cwt, which was ahead of the longer wool lamb averages of 500-530c/kg cwt for the better types. Part of the price difference was due to skin values, with most buyers only working on returns of a few dollars for recently shorn pelts.

Competition for store lambs was stronger, with orders from Horsham, Rainbow, Wycheproof, Echuca, Shepparton and the local area. Store buyers also showed a preference for shorn young lambs, which sold up to $9 dearer at $78-$98 for most. Longer wool young lambs returning to the paddock were similar; a few dollars dearer at $80-$100 for the better sized types.

Bidding for mutton varied around weight and quality. Pens of heavy crossbred ewes trended cheaper at $80-$95, with a restocker paying the top price of $99.20. The better drafts of trade weight mutton were similar-a few dollars dearer.

At the Hamilton saleyards on Monday, the agents yarded 25,563 lambs, 9467 fewer than last week.

The NLRS said mixed quality reduced yarding of young lambs greeted the usual buyers. Quality was not quite as good in the very good line up of excellent heavy and heavy trade lambs, with a higher percentage of lambs showing dryness. Demand was very strong at times for the better quality finished lambs, although prices fluctuated to be $5-$8 dearer on the heavy lambs, then slightly cheaper, ending up $4-$5 dearer. Light and medium trade lambs with less condition were unchanged to $1-$4 cheaper. Less restocker buyers were present, but they came from Horsham, Albury, Deniliquin, Swan Hill and locally.

The NLRS said lamb quality was again average to good, but more lighter and fewer heavy lambs were yarded. The usual buyers operated keenly in a mostly firm market, with select lots in the trade weight and heavy lambs selling up to a few dollars dearer.

The sheep offering included some good runs of Merino wethers, heavy crossbred sheep and a mix of lighter sheep. The usual buyers competed in a mostly firm market. Some of the lighter crossbred sheep sold a little easier and the medium and heavy sheep were up to a few dollars dearer. Medium wethers sold mostly firm, with the heavy wethers easier in places.

The NLRS said the generally poor quality yarding of crossbred and Merino lambs sold to stronger trade and processor competition from the usual buyers. Feeder and restocker buyers were prominent on the large selection of light weight lambs and prices eased marginally as numbers exceeded demand.

The NLRS said fewer trade, processor and restocker buyers were present and not all were fully active on a very mixed quality offering. There were very few lambs with any weight, with more shorn lambs offered. Prices fluctuated across the market.

In Western Australia at the Muchea saleyards on yesterday, the agents yarded 3760 lambs, 62 fewer than last week, and 6200 sheep, 1500 more.

The NLRS said quality was mixed with only small supplies of prime lambs and moderate supplies of heavy weight ewe mutton. Competition eased, with less restocker competition on ewes and store lambs and a number of processors provided only limited activity. Live export competition on wethers was strong. Prices overall remained good, but back slightly on last week.