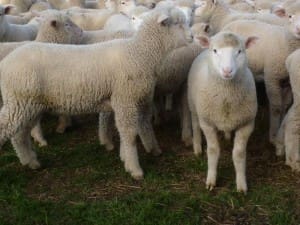 Although the few saleyards operating in NSW and Victoria, increased their lamb and sheep yardings, processors bid strongly on any quality offerings, especially heavy lambs and mutton.

The odd pens of early 2015-drop lambs continued to be offered in NSW — on AuctionsPlus last week — but agents are not expecting large numbers until August.

The ESDI for mutton finished the week on 404c/kg, unchanged after Friday’s sales, but up 18 cents for the week. The national mutton indicator closed unchanged on 403c/kg.

The NLRS said the quality of the lamb yarding was reasonable, with heavy lambs in top condition and lighter grades of mixed quality. Mainly heavy weights were penned along with a good run of trade lambs and more stores. All the buyers operated and competition was solid, resulting in trade lambs selling firm and the heavy grades selling to a dearer trend.

The NLRS said lamb quality was similar to previous sales with good numbers of well-finished lambs. Heavy and extra heavy weight lambs were well-supplied. The usual buyers competed strongly in a dearer market.

The NLRS said it was a typical winter offering, comprising mostly smaller lots of lamb and sheep in mixed condition, with the exception of a few pens of lambs off irrigation and grain feeders. The few regular meat buyers operated in a generally firm to dearer lamb market. The limited numbers made it difficult to generate accurate trends.

The market reached a top of $200 for 131 heavy export supplementary-fed lambs with an estimated carcase weight of 33kg. Local restockers bought odd pens, paying up to $90 for a pen of new season lambs weaned early.

The top end of the trade weight lambs sold from $132-$155, while a limited selection of export lambs generally sold from $163-$185.  Most of the better quality trade and export slaughter lambs, showing reasonable fat cover and finish, were estimated at 580-610c/kg cwt.

The sheep market averaged cheaper, although poor quality and limited numbers were probably the main reasons. The lighter weight lambs were very mixed for breed type and finish. The general run sold from $94-$116, with very light and plain types from $25-$78. Carcase prices for these secondary lambs fluctuated according to quality. Heavy ewes sold from $90-$116, while the general run of medium and lighter sheep sold from $65-$88.