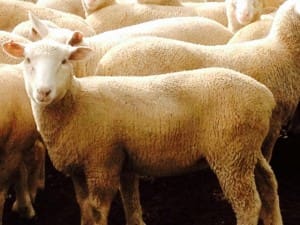 Heavy lambs sold for more than $200 in Forbes and Ballarat, and up to $206 at the Victorian saleyard, with carcase weight rates averaging 570-630c/kg at these and other centres.

Crawford Dowling Paul Constable said the quality of the lambs in Ballarat has been exceptional, with the market similar to previous weeks.

“Your good heavy lambs still sold well, the good trade lambs are still very well sought after and the light lambs at $90-$100, it’s just phenomenal for what they are.”

Mr Constable said any lack of quality lambs “in numbers” in other markets was helping the Ballarat rates, but no-one really knew what numbers of quality trade and heavy lambs were yet to come in.

“We were expecting even now to be standing around with not a lot to do.”

Landmark auctioneer at the SA Livestock Exchange Bill Warton said the centre’s top price of $197 for heavy lambs was the best this season.

“There was a shortage of lambs here yesterday, about 4000 less than what we have been getting.

“It does tell us that heavy lambs are going to run out; I think the supply of heavy lambs is getting shorter all the time now.”

In NSW, the NLRS said over-the-hook lamb and mutton rates held mainly firm as supply becomes tighter and some facilities are taking annual maintenance breaks. No quote was given due to a regular contributor not quoting at this time.

In Victoria, the NLRS said over-the-hook lamb rates remained unchanged across all categories this week, while mutton rates lifted an average of 3c/kg cwt.

In SA, the NLRS said over-the-hook lamb rates lifted slightly this week, with trade weight lambs averaging 565c/kg cwt. No trend was reported due to a contributor not quoting this week. Mutton rates were back an average of 8c/kg cwt across all categories.

Western Australia’s updated OTH rates were not available on the MLA website when this article was published.

The NLRS said the mixed yarding had good numbers of heavy weight lambs and lightweights, but only a limited number of ideal trade weights. All the regular buyers operated.

The NLRS said the quality of the lambs was generally good, with good numbers of well-finished trade and export weights. There were no extra heavyweights penned and a limited number of good quality store lambs. The regular buyers attended.

Good quality trade weight lambs recovered some of last week’s losses with the reduced supply contributing to a dearer market trend of $3-$7. The few good quality store lambs sold to restockers at similar prices to the previous sale. Export weight lambs also sold to a dearer trend, with prices improving by $7-$8 when taking weight variations into account.

The quality of the sheep was very mixed and cheaper for a plainer quality penning of wethers.

The NLRS said lamb quality was fair with good numbers of well-finished lambs offered along with the plainer types. Heavy and extra heavy weight lambs were well-supplied. The usual buyers competed in a dearer market.

The NLRS said quality remained mixed, with only limited supplies of well-finished trade and export lambs on offer. The regular buyers operated and the lamb market opened dearer before losing some momentum later in the sale.

Overall, the better quality slaughter lambs averaged around $2-$4 dearer than a week ago in a fluctuating sale. The market reached a top of $190 for extra-heavy export lambs.

There wasn’t as many lightweight lambs yarded compared to recent weeks and price results varied according to quality and type. Most light lambs to slaughter sold from $84-$116. There was limited restocking activity of up to $106.50 for store lambs displaying reasonable frame size, while odd pens of very small and plain lambs sold from $31-$56. The lead pens of trade weight lambs sold from $130-$155. The better-presented lambs made more than 600c/kg cwt, but the average over the general run was 570-580c/kg. There were some strong sales of heavy lambs early in the market before competition eased later in the auction. Most export lambs weighing over 28kg cwt sold from $162-$175, with only a handful of sales of extra-heavy types above $180 to a market top of $190. Export lambs averaged an estimated 570c/kg.

The smaller yarding of mutton comprised a mix of most weights and grades. The mutton sale was cheaper, with not all the regular export orders operating. The best lines of Merino sheep still made over 370c/kg cwt. Prices reached a top of $132.20 for a small pen of extra heavy crossbred wethers. Heavy-first cross ewes sold from $98-$122, while woolly Merino ewes reached $124.60.

Ballarat’s heavy lambs dearer, up to $206

Several pens of excellent quality, extra heavy export lambs sold for $200, reaching a market top of $206. Restockers and feeders were active, paying mostly from $92-$120. The lighter drafts made from $60-$73 and some well-grown first cross ewe lambs sold to $171.

The very mixed quality yarding of crossbred and Merino lambs sold to stronger competition provided by the usual local and interstate, trade and processor buyers. Feeder buyers were prominent on heavier shorn crossbreds and restockers were only occasional bidders on light weight Merino lambs.

The NLRS said a smaller field of trade and processor buyers was active, while restockers had limited impact. Prices generally improved across the market.

Lamb quality remained mixed, but was an improvement on last week, with some large drafts of good framed store lambs available. All buyers were present, but some did not operate due to the lift in prices across most categories. Most lambs sold $5-$10 dearer. Ewe and wether prices also improved by close to $4.