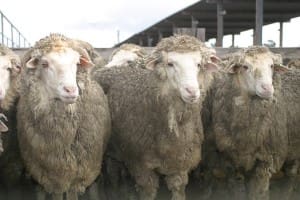 The ES lamb indicators also increased again mid-week with the biggest movements being in restocker lambs, up 11 cents to 587c/kg cwt; Merinos, up 7 cents to 489c/kg cwt and light lambs, rising 8 cents to 534c/kg cwt.

The NLRS said most of the yarding was new season lambs. There were ample numbers of well-bred light weights suitable for restockers, with most selling to Cowra area producers. Well-finished lambs were well-supplied and the usual orders competed in a solid market.

The sheep yarding included a good number of crossbred ewes, with some carrying plenty of weight. Prices remained solid in all categories, with the medium and heavy weights ranging from $66-$114.50, or 350c/kg-394c/kg cwt.

The NLRS said lamb quality improved with more weight a feature of the yarding. There was an excellent run of heavy and extra heavy lambs, but fewer trade and light store lambs.

The usual buyers competed in a much dearer market. Most categories lifted $8-$10 with some of the lighter store and trade lambs gaining $15-$18.

In Victoria at the Hamilton saleyards on Wednesday, the agents yarded 11,304 lambs, 8294 fewer than last week.

The NLRS said lamb the quality was better with more weight and condition. All the usual buyers attended and some didn’t operate fully during the sale. However, this didn’t seem to affect the market as prices trended dearer and light trade weights sold $6 better. Medium trade weight lambs were $8-$10 dearer and the heavier 4 score lambs were $4-$6 dearer as well. These sold at improved prices due to an export buyer operating more than at the previous sale.

The NLRS said lamb quality was very good. Heavy and extra heavy lambs were best supplied. There was a limited number of tradeweights and a handy run of heavier store lambs. All the usual buyers operated in a mostly firm to slightly dearer market.

At the Hamilton saleyards on Thursday, the agents yarded 19,379 sheep, 1514 fewer than last week.

The NLRS said with a larger field of processor buyers, the market opened up stronger to tail off a little towards the end of the sale. There was a vast range in mutton types, with sheep in better condition than in last sale. There was no significant restocker activity. Light sheep were $3-$4 dearer, especially in earlier sales, selling mainly from 270c/kg-350c/kg cwt. Medium trade 2 to 3 score mutton was $5-$8 dearer and heavy trade 3 and 4 score and the extra heavy 4 score sheep prices lifted $9-$10, ranging from 310c/kg-400c/kg cwt in the early stages.

The NLRS said the reduced yarding sold to the usual trade and processor buyers. The yarding lacked weight and quality overall, leaving the trade and processors limited options to fill orders. This let the small restocker presence purchase significant numbers amid some strong bidding. Light weight lambs were much dearer, while the heavier selection was generally firm on last week’s rates.

The NLRS said dry conditions and water shortages drove supply higher. Large supplies of ewe mutton and lambs were available, but only limited supplies of prime lambs and well-conditioned heavy ewes were offered.

Quality was mixed with the majority of drafts being lighter conditioned and most lambs dry and secondary in nature. Buyers from all sectors were active, with prices erratic and early sales cheaper but improving as the sale progressed.