Quality lambs with weight and heavy mutton in demand in saleyards 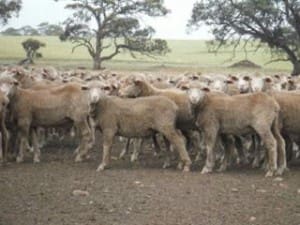 Trade and heavy lamb saleyard prices were generally firm to slightly cheaper in saleyards early this week as the failing season continued to drive consignments into saleyards and abattoirs weeks earlier.

The search for quality trade and heavy lambs with freshness and yield has extended in earnest into Victoria with increasing numbers of drier lambs being turned off in NSW and SA, but prices remain underpinned by restocking interest for light, light trade and Merino lambs.

MLA said during October, rainfall across most of the eastern states was ‘below average’ to ‘very much below average’, continuing what has been an exceptionally dry run. Matching the limited rainfall were ‘above average’ temperatures for most regions, accelerating the impact of the tightening stock water supplies.

WA was the only state to record rainfall of any significance, with ‘above average’ falls in most regions.

In response to the hot and dry conditions, eastern states cattle and lamb slaughter maintained the high pace, as many producers found no stocking pressure relief, and had little option but to offload, MLA said. The Eastern States Trade Lamb Indicator lost 17 cents during October.

Looking forward, in response to the limited rainfall, and dry three month rainfall outlook, it is likely the already high slaughter rates will be maintained for the remainder of the year, while restocking interest will remain limited, MLA said.

After Tuesday’s saleyard sales, MLA’s NLRS reported the Eastern States Trade Lamb Indicator as down four cents to 453c/kg cwt and the heavy lamb indice at 454c/kg cwt, down two cents. The ES mutton indicator is 10 cents up on 302c/kg cwt.

Over the hooks rates unchanged

The NLRS reported NSW over-the-hook lamb rates as firm across all weight ranges this week, with one contributor only lifting their rates in line to others of recent weeks. Mutton rates were marginally lower across all categories.

The NLRS said there was a reasonable selection of trade weight lambs along with good numbers of Merino lambs and hoggets. Lightweight crossbred lambs were also well-supplied. All the regular buyers operated.

The NLRS said the quality of the lamb offering was mixed and it sold to reduced competition, with one buyer absent. The yarding consisted of a fair to good quality penning of trade weight young lambs, and a fair supply of well-bred plainer conditioned lambs suitable for restockers. There was a limited supply of good quality heavy weight old lambs.

The market change for trade weight young lambs revolved around quality. The effects of the continuing hot and dry conditions showed in the lambs, particularly in skins. There was some restocker activity on the plain-conditioned young lambs, with the market trend slightly cheaper.

The old lambs again sold to a cheaper trend, as buyers showed greater preference for young lambs. Prices were down $4-$10, with quality a contributing factor.

There was a slight improvement in the sheep market, aided by the lack of supply. The quality of the offering was mixed and there were fewer ewes penned carrying too much weight and condition.

The NLRS said 4500 new season lambs penned with quality continuing to be very mixed. Some well-finished lambs and plainer drier drafts were offered. Most of the usual buyers competed in a fairly steady market.

In Victoria at the Bendigo saleyards on Monday, the agents yarded 14,911 lambs, 3840 fewer than last week.

The NLRS said the first drafts of young lambs from the southern grazing regions of Pyalong and Kilmore presented very well, however quality across the yarding was generally plainer with more lambs dry in the skin than a week ago.

All the usual meatworks operated, and prices for the better bred and finished slaughter lambs were within a dollar or two of last week’s result. The market reached a top of $135 for young lambs with a carcass weight of about 28kg, and it was one of just five sales of export lambs over $130. The better quality slaughter lambs were estimated at an average of 450c/kg-465c/kg cwt.

Light weight lambs benefited from solid restocker support and strong processing orders for the light export trade. Most sales ranged from $70-$88 to be similar to last week. Restocking competition was from Yarrawonga, Shepparton, Birchip and the local Bendigo area. The market for plainer bred lambs, weighing 18kg-20kg cwt, averaged about $5 easier. Most better-quality young domestic lambs sold from $95-$116. There were only limited draft of heavy lambs in the yarding, with about 15 pens of 24-26kg cwt young lambs selling from $120-$129.

Some recently shorn young lambs are now being offered and the best of these made up to an estimated 450c/kg cwt. However, processors were very selective with their bidding on any mixed lots of old lambs.

But he said buyers would be jammed up with numbers this week, with the season in the south finishing weeks earlier.

“We had one week’s grace, but I don’t know if we are going to another week.”

Sheep $11-plus dearer at Ballarat

The NLRS said that saleyards’ seasonal high in lamb numbers included some very good quality drafts of young lambs, but weight and finish tailed-off quickly. A big percentage of the offering was lighter store lambs. All the regular buyers, operated plus an additional meatworks from Junee in NSW which came south for the first time this week. Prices for the good quality export and trade slaughter lambs were firm to slightly dearer in places, while strong competition from store lamb buyers resulted in a dearer trend of $2-$8 for most light lambs. The market reached a top of $139 for export lambs, but there weren’t many heavy lambs in the yarding and sales over $120 were fairly limited.

Competition for store lambs was strong with most sales to the paddock at $72-$90, with the lines of better-bred young lambs averaging over $80. Store lambs sold to Bendigo, Shepparton, Birchip, Wagga and the local Ballarat area. There was a flat spot in the market for plainly bred and finished 18-20kg cwt lambs, with sales in this category working out cheaper. The bulk of the young lambs suitable for slaughter were trade weights that sold from $95-$118, with most sales averaging an estimated 450c/kg-460c/kg cwt. About 25 pens of 24-26kg cwt lambs sold from $120-$129. Only about 14 pens of extra heavy export lambs sold above $130 to the market top of $139.

Prices for the best quality Merino and crossbred sheep were dearer, gaining $11 and more in places. The better quality slaughter sheep with weight and finish were estimated at 280c/kg-300c/kg cwt. Heavy crossbred ewes sold to $92 and Merino wethers in a big skin made to $96. Rates for very plain and light sheep showed a cheaper trend.

TB White auctioneer Gerard White said processors were struggling to source lambs with weight and quality. He believed this would be an issue early next year.

“Come the New Year it is going to be interesting.”

The NLRS said sheep supply doubled as the large runs of store-condition lines continued to be penned due to the dry conditions. A large number of restockers attended as well as the usual trade and processor support. The lambs were firm to slightly dearer across all weight ranges including lightweight restocking lambs. Only a few lines in good condition came forward with most being dry lambs, leading to a broader range of dressed weight prices.

The increased sheep yarding covered all weights and grades with a run of 2 to 4 score ewes mainly making 250c/kg-310c/kg cwt. The regular field of mutton buyers again paid increased prices, up to $10 more.

The NLRS said most of the yarding of crossbred and Merino lambs lacked the finish of past weeks and sold to fluctuating competition from the usual trade and processor buyers. The sale started strongly, but prices became subdued as the sale progressed. Feeder and restocker interest lifted significantly and Adelaide plains, Mid North and Yorke Peninsula buyers were prominent.

Light weight 2 score crossbreds to feeders sold from $59-$85. The 3 scores were keenly sought after and returned from $76-$87. Lightweight 3 scores to trade buyers lifted $3, selling from $81-$97 and averaged 422c/kg cwt, while light trade weight 4 scores remained unchanged, selling from $85-$100, averaging 441c/kg cwt. Light weight Merinos sold to restockers for $40-$58, while trade weight 3 scores to processors made from $72-$84. The few shorn new season lambs attracted the strongest bidding.

The NLRS said the harvest and the Melbourne Cup Day influenced consignments this week. Most lambs were light and very light store new season drafts, shorn and unshorn drafts. Ewe mutton quality was similar, with strong numbers of light conditioned drafts available. Buyers from all sectors were active, resulting in solid price increases across most categories. Lambs were $5-$8 dearer, with ewe mutton up $3-$6.