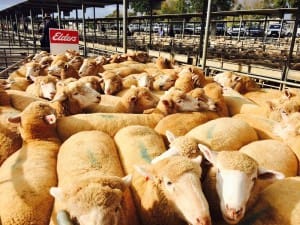 Prices for quality trade and heavy lambs, and light slaughter lines, were firm to dearer at major selling centres early this week, driven by mainly by domestic buyers seeking quality from reduced yardings.

Elders livestock manager at Bendigo Nigel Starick said most lamb processors have locked away much of their supplies direct to works, with no forward contracts in force and buyers generally topping up at spot prices.

“Domestic buyers have lifted their weights marginally, because the quality is not there in the 20-22kg cwt lambs.

“They’ve had to lift their weights to get the quality they need.”

Mr Starick said offerings of export weight lambs have come back in saleyards and processors have not had to cut their requirements, because the numbers are not there. But several plants have shut down for maintenance, he said.

“They are still getting quality with the 16-19kg cwt lambs, but it is not in the 20-22kg lambs, so the supermarkets are buying more of the 24-25kg lambs to keep the quality up.”

The National Livestock Reporting Service quoted all national and Eastern States Daily Indicators for lamb lifted after Tuesday’s saleyard sales concluded. The ESDIs for lamb are: restocker 561c/kg, up one cent; Merinos 521c/kg, up 6c; light 545c/kg, up 7c; trade 575c/kg, up 1c, and; heavy 583c/kg, up 5c. The national trade lamb indicator lifted two cents to 578c/kg and the heavy indice is up five cents to 585c/kg.

The ESDI for mutton is down nine cents to 357c/kg and the national indice closed on 356c.kg, down eight cents.

The NLRS said the mixed yarding of lambs had a good number of heavy weights along with a good percentage of lightweights. Ideal trade lambs were in limited supply.

The NLRS said the lamb offering featured some outstanding heavyweights. There was less competition for trade lambs this week, with one of last week’s orders not participating. Market trends were generally cheaper with trade weights down by $3-$8. The reduced competition and consumer resistance were cited as factors.

There were very few good quality lambs available to restockers. Weights were generally higher in the heavy lamb categories with a number of lines having had access to a grain supplement. While the top price was equal to that of last sale there was more weight in the lambs this week. The market trend was firm to slightly cheaper. Competition increased for the very low sheep numbers, resulting in a dearer trend.

The NLRS said it was a mixed lamb offering. There were still a few longer wool young lambs in a yarding of mostly light and trade weight old lambs, along with some well-finished heavy and extra heavy weights. Suitable store lambs were limited in supply. Most of the usual orders operated in a mixed market.

The mutton selection was mixed, but included some well-finished Merino ewes and wethers, along with the usual plainer light weights. Prices eased by $2-$4 on average and a little more for over-conditioned heavy weights. Light 2 score ewes made $42-$74 and the medium and heavy weights mostly sold from $56-$100 to range from 270-320c/kg cwt. Wethers ranged from $70-$110, to average around 360c/kg.

The NLRS said lamb quality improved, with a good offering of well-finished heavy and extra heavy weights. Most of the usual buyers competed in a firm to dearer market.

Mutton quality remains very mixed. Merinos made up most of the yarding and prices lifted. Merino ewes sold from $78-$132. Crossbreds ranged from $76-$127 and Dorper ewes averaged $92. Merino wethers sold from $80-$125.

Inverell prices back on quality from previous extreme rates

The NLRS said there was a good supply of trade and heavy lambs, along with several pens of light weights. Quality was fairly good with mainly well-finished lines with some plainer lambs. The market struggled to equal last sales prices, with most lambs selling to a cheaper trend.

The mutton yarding had more ewes and wethers, with several pens of heavy and medium weights. The market was back compared to the sale two weeks ago. Restockers were active in the market, competing on the lighter sheep. The 3 score Merino ewes averaged $64.80, slipping $17. Medium weight ewes to restockers sold from $91-$121, averaging $113.90. Merino wethers slipped $20 to $68.

The NLRS said lamb quality improved on a week-ago, with more better-finished lambs. The usual buyers operated in a market that favoured lambs suiting domestic and light kill orders. There was little price change for extra heavy export lambs.

Prices reached $201 for an exceptional line of extra heavy lambs estimated to weigh 40kg cwt. Demand from processors and restockers for light weight lambs was keen and most sales were $5-$8 dearer, at $84-$114. Very small and plain lambs sold from $40-$80, although on a carcase basis some of these were among the dearest in the market.

The general run of medium trade lambs sold from $112-$126. The trend of the major domestic buyers competing on heavier lambs to access better quality continued and 24-26kg cwt lambs averaged $3-$5 dearer, with most sales from $133-$158. On a carcase basis, lambs which suited these top domestic orders ranged from 570-590c/kg, with odd sales higher. Demand for extra heavy export lambs was steady at $158-$170 for most, with just a few stand-out pens out to the market top of $201.

The sheep sale was mostly firm to $5 dearer, despite not all the regular buyers operating for the second consecutive week. Heavy crossbred ewes sold from $90-$126, while heavy Merino wethers in a big skin topped at $118. Restockers paid from $81-$97 for crossbred ewes which had been joined for a winter lambing.

The NLRS said lamb quality was again average to good, with the usual buyers operating in wet conditions.

The NLRS said the mixed quality crossbred and Merino lambs sold to fluctuating trade and processor competition. Light and trade weight lambs were in demand and some feeder input ensured these classes lifted.

Naracoorte’s trade lambs up to $10 dearer

The NLRS said the usual trade and processor buyers were active, along with some restocker orders. Prices tended to improve across the market.

The NLRS said with dry conditions continuing, numbers remained solid. Lamb supplies were strong and dominated the yarding. Quality improved on last week, with solid supplies of prime lambs and good numbers of secondary lambs available. All buyers were present and prices remained firm across most categories.

There were some excellent heavy weight ewe drafts, along with plainer lines. Wether and ram supplies were plainer and limited in number. There was less competition for heavier ewes and heavy weight hoggets. Ewe mutton continued at very similar prices week-on-week.