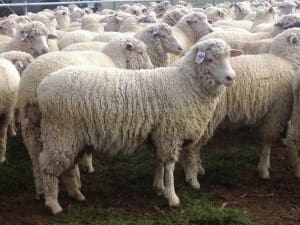 After Friday’s sales – only Cowra and Griffith in New South Wales – the National Livestock Reporting Service quoted all Eastern States Daily Indicators for lambs except for Merinos as lower.

The ESDI for mutton finished the week firm on 302c/kg and the national indicator is at 301c/kg, up 1 cent.

AuctionsPlus said sheep and lamb numbers contracted by 13,978 head after the Easter long weekend to 26,291.

The online market was steady this week as buyers were hesitant due to the prolonged dry conditions across much of the eastern states, market operations supervisor Anna Adams said.

Merino ewe numbers were back on recent weeks due to the Easter break. However, young Merino ewes featured strongly, ranging from $84-$125, to average $100. The top price was paid for a line from 17-19 month-old Titanga blood ewes scanned in lamb to Border Leicester rams at Lismore in Victoria. The 45kg lwt ewes had a 4cm skin. A large offering of old Merino ewes from Cockburn in South Australia sold for an average of $90. These 5 and 6 year-old Mutooroo blood ewes weighed 56kg lwt, were scanned in lamb to Merino rams and sold off-shears.

Merino wether lamb numbers were back on previous weeks and the prices ranged from $73-$83, averaging $77. The top-priced lambs were Gullengamble and Boxleigh blood wethers from Nyngan in New South Wales, averaged 38kg lwt and carried a 6.5cm skin.

The tops of the first cross future breeders was a tidy line from Skipton, Victoria. The 46kg lwt June-July 2015-drop lambs had a 4cm skin and sold for $147. White Dorper ewe lambs at Kapunda, South Australia, sold for $140. The 5-6 month-old White Dorper ewes averaged 39kg lwt.

The NLRS said the quality of the heavy and extra heavy lambs was good. There were more trade weights, but some were dry in the skin and lacked the finish required. Store lambs were in short supply. Not all the usual buyers operated in a market that started softly and gained momentum through the sale.

Light processing lambs sold from $74 and $104. Trade lambs remained similar to a fortnight ago at the end of the sale, with the medium and heavy trade weights mostly selling from $100-$125 or from 500-520c/kg cwt.

Sheep quality was good, with plenty of heavy weights. Heavy sheep eased $3-$6, while the medium weights were similar. Medium weights sold from $60-78, heavy Merinos made $95-$132 and crossbred ewes sold to $132.

The NLRS said lamb quality was generally good across all grades and particularly in the very well finished heavy lambs. There were more secondary lambs lacking finish. Mainly trade and heavy weights were penned, with fewer store lambs suitable for restockers. All buyers were present except for one and competition was variable resulting in a firm to slightly cheaper market.