Qld exclusion fencing is keeping kangaroos and wild dogs out 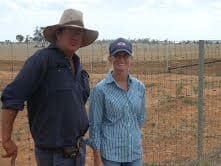 Robert Mackenzie with Amy Brown beside some exclusion fencing.

Exclusion fencing is increasing the carrying capacity of Queensland properties plagued by kangaroos and wild dogs.

“The main aim of the tour was to give producers ideas and information before they embark on their own fencing projects, and to look at how other producers have solved particular design problems with their fences,” Ms Brown said.

“The four properties we visited are using exclusion fencing with great success, both single property projects and cluster groups.”

Ms Brown said fencing costs have reduced in recent years due to competition between suppliers, but an exclusion fence could cost from $4000-$7500 per kilometre.

“The cost will depend on the quality of the fence you want to put up, but it doesn’t pay to take short cuts.

“Everyone we visited on the tour said you should put up the best fence you can afford,” she said.

“Any shortcuts will just mean more maintenance down the track.”

South-west Queensland graziers Robert and Beanie Mackenzie at Morven have increased carrying capacity by up to 50pc using exclusion fencing to protect grazing land from kangaroos and wild dogs.

“The fence is just part of our grazing management toolbox, but since the pressure from the ‘roos was removed, we have been able to take advantage of every rain event, confidently lock up country and use time control grazing,” Mrs MacKenzie said.

Their property was one of four featured as a part of the tour for sheep and cattle producers seeking innovative solutions to predator and grazing pressure control.

The Mackenzies fenced the entire boundary of their property ‘Moyallen’ in 2009, with more than 39 kilometres of 155cm high ‘Grip Lock’ fencing, featuring cemented in end assemblies and gateways, and foot netting.

“We have had only had half our normal rainfall over two years and we are still maintaining our breeding herd thanks to careful grazing management, part of which is keeping off the ‘roos.

“Waterways and roadways can sometimes be an added challenge when building exclusion fencing, but the floodgates in the fence have been through two major floods intact due to good design, and I hope this is something that our visitors took away from the tour,” she said.

“For others looking at using exclusion fencing, I recommend calculating the cost on a per hectare basis rather than per kilometre to give a more accurate idea of cost and return.

“It’s a long-term investment but we saw benefits within six months after we had rain,” Mrs Mackenzie said.

“I think it goes without saying that maintenance is imperative and we go around the entire boundary around once a month,” she said. 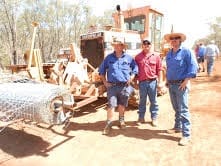 The tour builds on the interest generated by South West NRMS Collaborative Area Management (CAM) projects already underway at Morven, Mungallala, Tambo and Tomoo Creek.  South West NRM has just announced that Quilpie, Noorama and Wyandra districts have received priority in the most recent round of funding for Collaborative Area Management which will enable a further three groups of landholders to address predation and total grazing pressure issues in a co-operative manner.

Leading Sheep is an initiative designed to lead the way for a more profitable Queensland sheep and wool industry through application of new technologies, knowledge and skills.

The program is an important partnership between the Department of Agriculture, Fisheries and Forestry (DAFF) and Australian Wool Innovation Limited with support from AgForce.