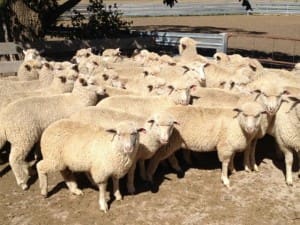 These 3-4 month-old 16.2kg cwt Poll Dorset lambs at Walcha sold for $105 on AuctionsPlus on Tuesday

Lamb yardings almost halved at Forbes, Bendigo, Ballarat and Naracoorte. Some agents also passed in pens of lambs at Bendigo, but sold them to processors after the sale at improved rates.

Several lots of light lambs were also passed-in on AuctionsPlus sales this week, but restockers took the opportunity in some saleyards to fill orders while processors stood back.

As a result of grid rates hitting 550-590c/kg cwt in recent weeks, agents are being told major domestic and export processors, including Coles and Swift Australia, have weeks of lamb supplies contracted direct.

Coincidentally, eastern states processors this week dropped their over-the-hook prices, with most quoting falls in lamb and mutton rates to the National Livestock Reporting Service.

In SA, the NLRS said most contributors made slight downward adjustments to over-the-hook lamb rates, with trade and heavy weight categories an average of 3c/kg cwt lower than last week. Mutton rates slipped 8c/kg cwt across all categories

The NLRS said it was a plainer quality yarding of lambs consisting of some good lines of trade and heavy weights along with larger numbers of lightweights. All the regular buyers operated in a cheaper market.

Ray White Rural Dubbo auctioneer David Armitage said some heavy lamb lines sold up to $15 cheaper than last week, but no lambs were passed in.

“It was certainly a considerably cheaper trend.”

He said in his area producers do have some pasture feed, though stock water is a problem.

“They will hold lambs for a little while to put more weight on them – all we need is a rain.

“If we get good widespread rain I think that will change that market altogether.”

He said producers would become accepting of the lower prices as the season dries.

“If the season changes and they start to get feed they will keep some lambs and put some weight on them.”

“The buyers can only buy to their instructions, but I don’t think the quality of the yarding was as good as the previous week,” he said.

“I don’t think the weight was there in the lambs, though some of the top end lambs weren’t very far away from the prices of the week before.”

Well-finished lambs at Tamworth $4-$6 down

The NLRS said the quality of the lambs was fair to good. However, they comprised a fair percentage of light lambs and young 1st X ewes suitable for restocker and finishing orders. There were fewer well-finished lambs suitable for trade and export orders. The regular buyers attended, but demand for lambs to process was down.

Restocker demand for the young first cross ewes was strong with prices varying greatly depending on growth for age. Restocker lambs sold to a slightly cheaper trend with breed quality a factor. Well-finished trade and heavy weight lambs suffered from a fall in demand to show a cheaper trend of $4-$6.

The sheep market was firm to slightly dearer with quite a few well-finished lots. There was also a fair supply of medium weight Merino wethers carrying almost a full fleece.

The NLRS said lamb quality improved slightly from the previous sale with good numbers of finished lambs along with plainer types. The usual buyers operated in a firm to easier market, dependant on quality.

In the Inverell saleyards on Tuesday, the agents yarded 2720 lambs and 1064 sheep.

The NLRS said the lamb yarding contained a good supply of trade weights. There were several pens of heavy lambs and light lambs were also in fair numbers. Quality was mixed with some good runs of well-finished lambs, along with several lots of lambs showing some dryness.

Competition was weaker with most lambs selling $10-$15 cheaper. Restockers were active in the market acquiring most of the light weight lambs. The yarding of mutton consisted of several pens of well finished 3 and 4 score heavy weights, along with a good supply of medium and light weight sheep. The market saw little change, although some sales of the light sheep were slightly easier.

Agents pass in lambs at Bendigo

The NLRS said there was a noticeable drop in lamb supplies as producers reacted to the cheaper rates of the previous week. All the regular buyers attended but not all operated and the market for lamb and mutton was cheaper, with the heaviest slaughter stock the most affected.

Lamb prices tended to vary based on quality and weight and sales ranged from a few dollars cheaper to up to $12 lower in places. The market reached a top of $170 for a quality pen of export lambs estimated to weigh about 32kg cwt with a $9 skin. There were only a few pens of extra heavy lambs which sold above $160.

Bidding for store and light weight slaughter lambs in the yarding were was the least affected by the softer trend, with most sales remaining in a range of $70-$95. Store competition was mainly from Swan Hill and Finley, with some local orders.

The best quality trade lambs suiting the top end domestic orders held their value the best at $125-$138, making upwards of 560c/kg cwt at times. Bidding was more selective on the plainer bred and shaped trade lambs which generally sold from $100-$122, fluctuating from an estimated 480c/kg-540c/kg cwt. Agents did pass odd pens in.

The sheep yarding comprised some good lines of Merino wethers and ewes, but there were more very plain and lightweight sheep at the bottom end of the market. Extra heavy crossbred ewes couldn’t maintain the rates of last week and eased by up to $20, reaching a top of $122. The lead pens of Merino wethers, most in big skins, sold from $105-$132.60. The middle run of slaughter ewes sold from $60-$80, with very light and plain types making $12-$52. The better quality slaughter sheep ranged from about 320c/kg-360c/kg cwt, with some sales of Merinos higher.

Elders Bendigo livestock manager Nigel Starick said his clients passed in a couple of pens of lambs and resold them afterwards at improved rates.

“It was no worries, the money was there.”

“The prices got to an unsustainable level.”

He has told his clients with lambs to “sit for three weeks” if they have feed and water.

“If they can hold lambs, I’ve told them to hold for three weeks, because I think there will be a rectification.

“There has been a big glut recently, with Bendigo consistently yarding 10,000-11,000 lambs over the last three weeks in February, which is huge.”

Agent are sending a lot of wethers into markets, because there are no live export orders operating, he said.

“Even though prices were softer on Monday, it is still a hell of a rate for wethers.”

Ballarat trade and heavy lambs $5-$10 back

The NLRS said the quality of the trade and heavy weight lambs was good, although the heavy lines weren’t carrying as much weight as last week. The usual buyers operated in a generally cheaper market.

The NLRS said the very good quality yarding of crossbred and Merino lambs sold to easing competition from the usual trade and processor buyers, who bid only sparingly. However, feeder and restocker buyers were undeterred by the prices and bid fiercely on suitable light weight crossbreds, pushing rates dearer.

The NLRS said a smaller field of buyers bid carefully and, along with limited restocker demand, prices fell across the market. Lambs with unknown seed status or with skins affected by seed were discounted by up to $20 and more in places.

The NLRS said continuing hot dry conditions led to substantially more very light Merino lambs being yarded. There were moderate supplies of prime, light weight and crossbred store lambs. Quality continued to decline across the yarding with weight and condition reducing. All buyers were present however live export competition eased. Quality impacted prices with the better quality drafts close to firm but secondary and very light drafts were back across the yarding.

Restockers purchased light weight and conditioned mature ewes for $25-$52 and Merino ewe hoggets made from $40 and up to $92 for a well-grown, quality draft. Wether prices eased on reduced live export competition, with export weight drafts making $65-$110 and back $5. Lighter drafts to restockers and feeders also eased with prices from $40-$80 for most.