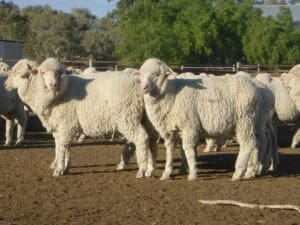 Trade lambs were least affected, and slightly dearer in Victoria, when domestic processors competed for the limited quality supplies available against restockers and exporters.

Mutton rates dipped in some centres, but quality medium and heavy 2 and 3 score mutton is consistently making 380-430c/kg in several centres, and up to 460c/kg at Horsham.

The ESDI for mutton closed down eight cents at 389c/kg and the national indice was at 388c/kg, down nine cents.

The NLRS said the much plainer quality yarding had a large percentage of light weight crossbreds and Merinos, and limited numbers of trade and heavy weights.

The NLRS said the yarding had a good supply of trade weights and heavy lambs, with a fair number of light lambs. Quality was fairly good with most lambs well finished.

Competition was much stronger with the market $10 dearer and more in places. Restockers were active in the market, helping push light lamb prices up.

The small penning of hoggets attracted keen demand. The yarding of mutton was made up of several pens of heavy ewes and wethers, with several pens in full wool. The market was much dearer with most sheep selling $15 dearer and more in places.

The NLRS said quality slipped, with the greater change across trade lamb categories. A full field of buyers attended and there was more restocker competition.

Mutton quality was mixed and mostly medium weights. Merino ewes suitable for the trade were well-supplied and competition waned, resulting in a $6 cheaper trend. Trade sheep made from $68-$102 to average 384c/kg cwt. Heavy sheep sold from $92-$125. Heavy wethers reached a top price of $138.20 to average from 361-401c/kg.

The NLRS said the usual buyers and one extra heavier sheep processor operated. Quality was again very good, with many pens of medium trade weight 3 and 4 score lambs as well as the light trade and light weight 1 scores. Restockers from Shepparton and some local agents were active, with less competition from South Australia.

The NLRS said fewer heavy lambs were yarded, however there was still a good selection of trade weight and heavy lambs. The usual buyers operated keenly in a slightly dearer market for trade weight lambs. Extra heavy lambs sold a few dollars easier. Restockers paid from $82-$107 for lambs.

The NLRS said was a mainly average quality yarding with large lines of good Merino and crossbred lambs. Competition was solid from a full field of buyers and lamb prices were mainly firm to dearer, Light store lambs were up $3 and sold from $25-$55. Lambs weighing from 16-18kg cwt were firm, making to $105 or 540c/kg cwt. Trade weight lambs sold from $69-$120, down $3-$5. Heavy lambs were firm and made from $93-$130, to average 520c/kg cwt. Hoggets sold from $40 to restockers and feeders up to $125 to the trade.