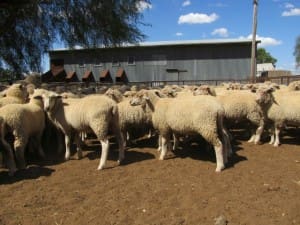 These 16.8kg cwt White Suffolk cross lambs at Narromine sold for $99 on AuctionsPlus this week

Processors paid more for lambs and sheep in saleyards mid-week as some producers tightened supply in response to the recent price falls.

After Tuesday’s saleyard sales, the National Livestock Reporting Service quoted all eastern states and national indicators for lamb and mutton as improved.

Despite the NLRS quoting processors as maintaining over-the-hook rates for lamb and mutton at lower levels this week due to consignments booked direct to abattoirs, saleyard prices early this week indicate an earlier than expected tightening in quality supplies.

Landmark Bendigo auctioneer Richard Leitch said the $10-$15 lift in lamb prices at Bendigo was not surprising due to Monday’s yarding being about half the number offered last week.

“There are plenty of half-finished lambs available, but not a lot of real good lambs.

Mr Leitch said two weeks ago he was quoted a hook price of 420-430c/kg cwt for Merino lambs, but had them killed this week at 500c/kg.

He expected supplies of quality trade and export lambs to tighten in mid-April.

“Come mid-April I don’t where they are going to find quality lambs.

“It will tighten even more – because of the feed situation people haven’t been able to finish lambs.”

“There were not a lot of heavy lambs in the market, but they pushed them along a bit as well.”

He said the pre-booking delay for nearby works was only about a week and it appeared the stronger competition came from domestic wholesalers forced to pay more money for quality lambs. The yarding was a normal turn-off with the dry season.

“We are in a situation where they do need to sell them.”

Ballarat price lift was across all categories

Crawford Dowling director Barclay Dowling at Ballarat said the $5-$10 price lift in the saleyards this week was due to reduced supplies lifting processor demand.

“There is always a little space there and numbers have dropped off with the drop in price.

“People have held off and I suppose we’ll send them over the hooks rather than to the market.”

He said higher prices were paid at Ballarat for all lambs, from light to export weight categories.

“There was more lift in the trade lambs.”

“What it is going to be like next week depends on numbers I would say.”

He said there were some good quality lambs being yarded.

“People have been able to do a good job after January rain got the feed going and the lambs off feeders were pretty good.”

The NLRS indicator for restocker lambs lifted 22 cents to 515c/kg this week, leading the general improvement in carcase lamb and mutton indicators.

The ES and national mutton indicators were both up three cents to 333c/kg.

In NSW, the NLRS said over-the-hook lamb and mutton rates across all weight ranges were lower this week in response to supplies both direct-to-works and at the saleyards remaining high due to the dry conditions.

In SA, the NLRS said over-the-hook trade and heavy weight lamb rates were 3c/kg cwt lower this week on average, while light weight and Merino lambs remained unchanged. Mutton rates fell an average of 23c/kg cwt across all categories.

In Western Australia, the NLRS quoted the over-the-hook lamb and mutton rates as unchanged.

Tasmania’s over-the-hook rates for mutton and lamb were unchanged this week, according to the NLRS.

The NLRS said it was a very mixed yarding with a large percentage of lightweight lambs. There were limited numbers of ideal trade and heavy weight lambs. All the regular buyers operated in a stronger market.

The NLRS said the quality of the lambs was fair to very good, with a good supply of heavy weights. There was a good selection of trade weights, however restocker lambs were scarce. The usual buying orders were in place.

The quality of the sheep offering was fair to good. Medium and heavy ewes sold firm to dearer. The medium and heavy wethers were firm to a little cheaper.

The NLRS said lamb quality was mixed, with excellent numbers of well-finished trade and heavy weights, and a good percentage of dry lambs. All the usual buyers operated in a dearer market.

The NLRS said the substantial decline in lamb and sheep numbers came as farmers reacted to the cheaper prices recorded in the past week. The usual buyers attended and the smaller yarding did have an impact on the market.

Slaughter lambs were mostly $5-$12 dearer. The best quality pens of heavy domestic lambs suiting supermarket orders, recorded the most price improvement in the lamb sale. The market reached a top of $171 for heavy export lambs estimated 33kg cwt – one of about 10 pens of extra heavy lambs to make more than $160.

Prices for light lambs trended dearer overall, but results varied breed for quality and finish. There was only limited restocker support from Swan Hill and the local Bendigo area, with most sales to the paddock being plainer and smaller lambs at $56-$86. The general run of trade and lightweight lambs for slaughter sold from $90-$116. Several agents offered light and trade Merino lambs which sold from $56-$122, to average around 480c/kg cwt.

The mutton yarding more than halved and prices were significantly dearer than a week ago, up $10-$16 to regain most of the previous week’s losses. Heavy crossbred ewes sold to a top of $115, while a run of Merino sheep with high value skins sold to a top of $108/head. It was estimated the general run of mutton returned 330-340c/kg cwt.

The NLRS said the quality of the trade weight and heavy lambs was good. The usual buyers operated in dearer market with lambs generally selling from $5-$10 dearer than last week. Several pens of extra heavy lambs reached $170. Restockers and feeders were active and mostly paid from $78-$108.20, though lighter drafts made $40-$58. They also paid from $65-$90 for Merino wethers.

The NLRS said the mixed quality yarding crossbred and Merino lambs sold to stronger trade and processor competition from the usual buyers. Feeder and restocker buyers were only occasional combatants.

The NLRS said the usual buyers were present, but not all were active. Most of the lamb yarding lacked condition, but they sold to a dearer trend.

The NLRS said the quality of the yarding lifted. Most of the lambs were lighter weight secondary drafts. However, more prime lambs were yarded and met great demand, to sell $5-$10 dearer for trade types. All buyers were present and active.

Ewe supplies included some good medium and heavy weight drafts, but most were lighter in condition. Prices rose by $6-$8 on quality mutton and by $2-$4 on lighter lines. Wether and ram prices were solid and remained firm on last week.

Wether prices were firm. Export weight wether drafts sold to restockers and processors for $79-$100, to be firm. Lighter weight and store wether categories made from $68-$77 to also remain firm.