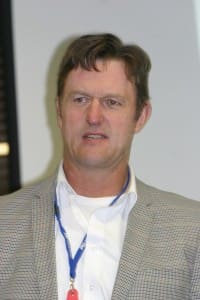 Grass seed contamination in sheepmeat could shut a processor out of an overseas market for up to six months, a Victorian saleyards conference was told in Melbourne last week.

Some processors want a national Producer Identification Code database and feedback system for grass seed-affected livestock, he told the conference.

A National Grass Seed Action Plan is aiming at reducing grass seed infestation incidence to less than five per cent of lamb lots at participating processors by 2015. Up to 60 percent of carcases need trimming for grass seeds, costing up to $30 per carcase, MLA research has found.

Dr Rutley said a scorecard for saleyard lots was also being looked at and although TFI is not recommending mandatory electronic tagging of sheep, he said EID tags would also help processors trace the origin of seed-affected livestock.

“The sort of problems that we face if we send a container with one grass seed on the outside of a shoulder going to England is that we will be thrown out of the market for three to six months.

“Apart from recalling it all it will cost us hundreds of thousands of dollars,” he told the conference.

“We fill up retainer rails in abattoirs and the slaughter chain slows down.

“God forbid one of those grass seeds gets into the boning room and then it all has to be cleaned,” he said.

“So there are some really significant costs there if we stuff up and it’s a numbers game.”

“One of the problems we have is we find seedy carcases the different processors are giving different feedback.

“So TFI, Swifts and Scotts are all working together with the National Grass Seed Action Plan,” he said.

“Depending on how you cost I think it is about $1 or $2 per kilogram carcase weight.”

“But we know that we get seedy carcases at certain times and we also know that some of those people have been stung up in perhaps some of the Mallee saleyards and all of a sudden they are coming up at Hamilton.

“They have wizened up after being hit so they flog them down at a different saleyards,” he said.

“We are looking to put together a national PIC database of where seedy carcases are coming from.

“They are looking at a little scorecard with red lights, green light and amber lights on it.”

“But one processor can’t deal with it because we need supply, so we can’t condemn them – we all have to work together and really it is an industry problem.

“This year we are getting more serious and two weeks ago I was asked if at Tamworth we can do a grass seeds workshops – we are doing that in a few weeks.

“That’s because our buyer there at Armidale started kicking people in the pants,” he said.

“We don’t just want to kick people in the pants, we actually want to give them solutions because we want their product.”