Processors get more selective on trade and export lambs 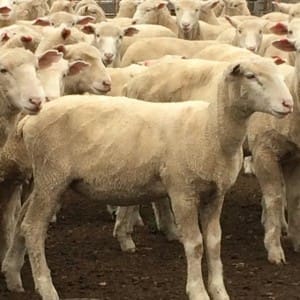 Competition increased for sheep in saleyards offering good numbers mid-week, but processors could afford to be more selective on lambs, with trade and heavy weight rates generally slipping.

Prices for quality trade and heavy lambs improved in NSW, but fell in other centres, especially in Victorian saleyards, where more prime lambs were available.

“They are getting plenty of numbers out of the north, with a lot of Merino lambs being contracted, but few crossbreds.”

“A good rain would change everything, but it is just not happening.

“It is just dry here at the moment and I think next week will be tough enough too,” he said.

“If we can get this glut out of the road and get a good rain it would change everything.”

The National Livestock Reporting Service quoted its Eastern States Daily Indicators for restocker lambs as up one cent to 542c/kg and Merino lambs at 486c/kg, up three cents, after Tuesday’s saleyard sales. But the light slaughter lamb indicator fell five cents to 506c/kg, the trade lamb indice is down four cents to 533c/kg and heavy lambs closed at 540c/kg, down three cents. The national trade lamb indicator is on 539c/kg and the heavy lamb indice is 543c/kg.

The ESDI for mutton is up three cents to 370c/kg, and nationally the mutton indicator is 367c/kg.

In NSW, the NLRS said over-the-hook lamb rates were marginally higher week-on-week, while a couple of contributors are taking a wait-and-see approach in response to rising saleyard prices. Mutton prices across all weight ranges were dearer.

In Tasmania, the NLRS quoted the upper limit for 16-18 kg lambs as down 50c/kg but all other rates for mutton and lamb were left unchanged this week.

This week’s WA OTH rates were not available this morning.

The NLRS said it was a good quality yarding with a good number of heavy weight lambs and fair number of trade weights. All the regular buyers operated.

The NLRS said lamb quality was fair to very good with trade weight and heavy lambs well-represented. Restockers were well catered for by the fair supply of plainer condition young lambs. There was more young lambs from the New England area showing varying degrees of growth and finish. The regular processors attended, but not the extra buyers from the pre-Easter sale.

Compared to the pre-Easter sale, demand was strong through all categories. Secondary quality light and medium weight trade lambs also sold to a dearer trend. Good quality well-finished trade weight lambs sold to a dearer trend, up $5-$8. Heavy weight lambs over 24kg were $1-$4 dearer. Restockers were active on young lambs, although there is no market comparison due to the lack of similar lambs in the sale prior to Easter.

The fair to good quality penning of sheep had some plain condition lots along with a few pens of full wool Merino ewes. The market trend was firm to dearer with some quality-related price change.

The NLRS said lamb numbers increased by about 25 percent in the first sale after the Easter break, with the dry conditions also a factor in the larger yarding. While the usual group of buyers attended, demand was patchy. The trade and export slaughter lambs were generally cheaper compared to the previous sale held a fortnight ago. The better bred and finished lambs maintained their value the best, while secondary types were the most impacted by the selective bidding. The market also weakened as it progressed, causing further price fluctuations.

The market reached a top of $178 for heavy export lambs estimated at around 33kg cwt; one of only three sales above $170. Light weight lambs (14-18kg cwt) sold to strong demand at $75-$96 for most to be the only category consistently dearer than a fortnight ago. Restockers from Horsham, Finley, Shepparton, Wycheproof and the local area paid to $109 for first-cross ewe lambs. A feature run of young longer-wooled Merino ewe lambs from the Riverina sold to $106.50. The general run of store lambs made from $52-$96.

Prices fluctuated for the plainer trade weight lambs as buyers were more selective. Restockers and feeders were active and they paid mostly from $79-$115 and from $24-$64 for the lighter lots. Light weight 1 and 2 score lambs sold from $78-$92.

The NLRS said there were good numbers of well-finished lambs and plainer drier types. Most were heavy and extra heavyweight lambs. The usual buyers competed in a firm to easier market.

The NLRS said there was a fair penning of light lambs, a good supply of trade weights and more heavy and extra heavy lambs offered. Quality was mixed, with several runs of well-finished lambs, but some lambs showed dryness in the skin. Competition was stronger with most categories selling $10 dearer. Hoggets also met a strong market.

The sheep were mainly of medium weight ewes and wethers, plus a few pens of heavy mutton. Prices struggled to hold firm for most sheep.

The NLRS said there was a good selection of heavy weight crossbreds and a very large proportion of light weight Merino lambs that sold to weakening competition from the usual trade and processor buyers. Restockers from the mid north and Yorke Peninsula were active on the many light weight Merinos available.

The yarding of mixed quality and weight sheep sold to erratic competition from a small group of trade and processor buyers. Trade buyers were keen to secure small lines of sheep, but rates eased after they filled orders. Restockers bid only occasionally and purchased wethers from $62-$78.

The NLRS said the usual buyers were active on the yarding of mostly store conditioned lambs of mixed quality. There was increased restocker activity and prices fluctuated.

The NLRS said quality was reasonable, but there were limited supplies of prime lambs. Lighter conditioned drafts of lambs and ewes dominated the supply. Competition remained solid from the usual buyers, though live exporter bidding was selective. Prices remained firm with some signs of firming as the market progressed.