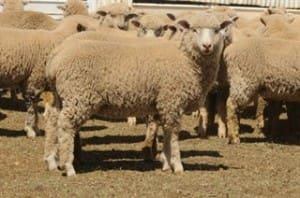 These 5-6 month-old 16.4kg cwt Poll Dorset-1stX lambs at Binnaway NSW sold for $93 on AuctionsPlus on Tuesday.

Buyers rewarded quality but continued to discount dry or seed-affected lambs at saleyards early this week.

With numbers of quality new season lambs dropping in the northern markets, buyers are seeing the first runs of young lambs in the south, with exporters seeking fresh quality heavy lines.

MLA’s National Livestock Reporting Service quoted the Eastern States Trade Lamb Indicator as unchanged on 454c/kg cwt after the last sale on Tuesday, with the heavy lamb indicator on 459c/kg cwt. The ES mutton indicator is at 273c/kg, down two cents.

The national lamb indicators were also mostly down or unchanged, apart from the heavy category. A big drop in the restocker indicator, down 11 cents, indicated a slackening in demand to parity with heavy and trade carcase weight prices. The lamb indicators are: restocker 457c/kg cwt, down 11 cents; Merino 381, no change; light 4176c/kg, down 5c; trade 453c/kg, nc; heavy 457, up 4c. The mutton indicator is at 273c/kg, up three cents.

Processors reported declines in OTH lamb rates to the NLRS this week, apart from in WA, as the dry season takes its toll on skins and carcase yields. Mutton rates were also generally lower in all states, except WA.

In NSW, the NLRS said OTH lamb and mutton rates again decreased across all weight ranges as physical market prices fell last week. Quality continues to be mixed, with more young lambs presenting with dry skins as the hot and windy weather persists in some areas.

Tasmania’s OTH rates were unchanged for light and trade lambs, slightly better for heavies and down for the extra heavy category. Sheep rates fell across the weights.

The NLRS said following the cheaper markets of the previous week and with harvest under way in some districts, numbers were back considerably. It was a much plainer quality yarding with limited numbers of new season and heavy weight old lambs. Merino lambs and hoggets were well-supplied.

Mutton quality was very mixed with no good lines of sheep compared to previous sales. Light and medium weight sheep were $4-$6 cheaper while the heavy weight ewes were $1 easier. Heavy weight wethers were up to $8 cheaper. The 2 score ewes sold from $28 to $60, while the better 3 and 4 score medium and heavy weights sold from $48-$93 for Merinos and $86 for crossbreds. The 3 and 4 score Merino wethers sold from $56-$94. A single extra heavy weight crossbred wether sold for $100.

The NLRS said the quality of the lambs was fair to good with young lambs well-represented. There was a good supply of high quality young lambs along with quite a few secondary lots showing dryness and seed contamination. The usual buyers attended, but the market tended cheaper.

Trade weight young lambs were firm to $5 cheaper. There were some quality-related positive price changes. The heavy young lambs were up to $6 cheaper with a number of pens deemed to carry to much condition.

Demand for old lambs continues to decline with secondary quality lots attracting restricted competition. Although cheaper, the market for the good quality trade and heavyweight lambs held up reasonably well. Once again there were some quality-related positive price changes.

In the sheep market there were large discounts in place for extra heavy sheep carrying too much weight and condition. Overall market trends were cheaper throughout with good quality, well finished medium and heavyweights least affected.

The NLRS said 5300 new season lambs were penned and quality was similar to previous sales. More of the yarding showed signs of dryness. The usual buyers competed in a dearer market.

Lambs $8-$10 cheaper on quality at Inverell

The NLRS said the fairly mixed quality yarding of lambs had some well-finished lines. However, several consignments showed the effects of the dry weather. There were a few pens of young lambs, but most were old lambs. Trade weights were well-supplied and there were several pens of heavy and extra heavy lambs.

The NLRS said lamb quality was average to good with a better selection of trade and heavy lambs. The usual buyers bid strongly, with the better-conditioned quality lambs selling generally $2-$5 dearer than last week. The best of the heavy lambs sold to $134 at around 450c/kg cwt. Feeders and restockers sourced light lambs from $28-$60 and heavier lambs from $69-$98.

Sheep sold to stronger demand to be $2-$5 up on last week. An outstanding pen of heavy Merino wethers sold to $88, with most wethers selling $2 better. Restockers paid from $72-$83 for crossbred ewes.

The NLRS said most of the lamb yarding again comprised light weight store-conditioned lambs. This suited the strong field of store buyers who paid similar to slightly higher prices this week.

The usual meat processors were active and they paid firm to slightly easier prices for trade weight lambs and $2-$4 less for heavier export weights. Overall the quality of the sheep and lambs was again mixed, with fewer being of very good quality due to the continuing dry conditions.

Solid demand despite quality at Dublin

The NLRS said the yarding of crossbred and Merino lambs sold to solid competition from the usual trade and processor buyers. The quality of the yarding was generally poor, with most lambs showing the rigors of the dry season. The few good quality lambs yarded attracted stronger bidding and the large numbers of light weight crossbreds sold to animated bidding by feeders from the mid-north and Yorke Peninsula.

Most lamb prices slip $5 at Muchea

The NLRS said numbers lifted almost 10 percent with harvest commencing in eastern and northern districts. Quality continued to decline, with large numbers of light-conditioned ewes and very limited supplies of prime trade and heavy lambs available. Most lambs were light weight and store categories, with moderate numbers of shorn lambs and light weight Merinos. Restocker interest kept a base in the market, with most processors bidding erratically, particularly on lamb. Prices slipped around $5 across most trade and processor categories, with restocker and ram categories close to firm.

Light weight processor categories remained equal, with prices from $65-$90.50. Trade lamb started the sale at discounts of $12, but closed the sale $5 dearer. Most trade lamb sold from $78-$95 with late sales lifting to a top of $114. Shorn trade and heavy lambs made from $85-$95. Better conditioned light and store lambs to feeders and restockers lifted $2, with sales from $60-$81, while light drafts including most Merino store lambs made from $35-$60.

Ewe prices were mixed with the very light weight drafts remaining close to equal at $30-$48. Large numbers of 2 score processor mutton slipped $5 for a $57 average, with the better 3 and 4 score ewes back by close to $10 and selling from $55-$83. Restockers were active on mature ewe drafts with better conditioned, longer-woolled lines firm and selling from $76-$98. However, most ewes sold close to $8 cheaper, from $55-$70.

Wether prices were mostly cheaper with very limited live export activity. Heavy wethers to processors made from $80-$100 to be close to equal, with those going to feed making $68-$85. Lighter and store drafts slipped $3-$4, with most sales from $55-$77 and very light wether drafts including wether lambs $50-$70. Ram prices were solid, as better young rams made $40-$65, with old rams to processors from $15-$45.