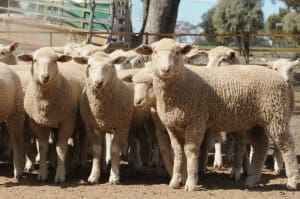 These Lambpro composite lambs, 15.3kg cwt, sold for $96 at Narromine, NSW, on AuctionsPlus this week.

The National Livestock Reporting Service said more lambs at some NSW saleyards are getting drier in their skins with more seed and at Deniliquin several pens of young trade lambs lacking carcase finish were passed in after struggling to gain processor support.

Only at Tamworth, Corowa and Forbes in NSW, and at Dublin in South Australia, light 12.1-18kg cwt new season lambs make more than 600c/kg at times, and only at Corowa did young 18.1-22kg trade weights sell for more than 600c/kg. Restockers paid up to 805c/kg and 906c/kg cwt for some lines of first cross ewe lambs at Naracoorte.

After Tuesday’s saleyard sales, the NLRS Eastern State Daily Indicators for all lamb categories and for mutton were quoted lower. The lamb ESDIs are: restocker 561c/kg, down 5 cents; Merino 436c/kg, down 15c; light 490c/kg, down 9c; trade 512c/kg, down 6c and heavy 507c/kg, down 3c. The national trade lamb indicator fell 4 cents to 518c/kg and the heavy indice is on 509c/kg, also 4 cents lower.

The ESDI for mutton is 5 cents lower on 345c/kg and the national indicator is down 7 cents on 348c/kg.

Over the hook prices fall

In Victoria, the NLRS said lamb over-the-hook indicators declined across all categories this week, with new season lamb supplies increasing and reports of exporter and domestic contracts filling well in advance. Lambs from 16-24kg are quoted at 530-580c/kg, down 30-48 cents, 26kg+ lambs are down 25 cents to 540c/kg and Merinos 16-22kg are at 500c/kg.

The NLRS said with the cheaper market of the previous sale lamb numbers fell considerably. It was a mixed yarding with a reasonable selection of new season lambs and heavy weight old lambs, and a large percentage of Merino lambs and hoggets.

The NLRS said the number of new season lambs lifted to 7700. Quality was good in the trade and heavy weights and there were more light lambs, which were keenly sought by restockers. Some of the lambs were starting to dry in the skin. All the usual buyers operated along with increased restocking competition in a market where light lambs were dearer. Trade weights averaged cheaper, but sold stronger as the sale progressed and heavy lambs were cheaper.

The NLRS said the regular buyers operated in a much cheaper sale compared to a fortnight ago, though the general lamb market has experienced significant price corrections since Deniliquin’s September 8 sale. The quality of the young lambs was plainer, with more lambs showing dryness in the skin and some seed infestation. Pens of young trade lambs lacking carcase finish struggled to gain processor support and agents passed in several runs for shearing and further paddock finishing.

The better bred lines of light weight young lambs sold from $83-$98, with some selling to restockers. A run of very small and immature Merino lambs off station country sold from $37-$45 to restockers.

The offering of old season lambs was limited to a few hundred and most were sold in odd pen lots as tail-end drafts. Prices for these were cheaper, up to $128 for a very good pen of Dorpers, though averaging less than $80 over the offering.

The sheep yarding comprised mostly Merino ewes and prices were noticeably cheaper than a fortnight ago, but similar to recent sales. Two lines of heavy Merino ewes in big skins made from $104-$108. Extra heavy crossbred ewes sold to $107, but sales above $100 were limited. Most ewes were leaner trade weight types which sold from $63-$92. The better drafts of mutton were estimated at 300-330c/kg cwt.

The NLRS said the quality of the lambs was very mixed, with a limited supply of good quality lambs. The usual buyers attended. Demand was weaker and resulted in cheaper trends.

The NLRS said 12,000 new season lambs were penned and quality was very mixed. There were some good runs of well-finished lambs and plainer drier types. The usual buyers were active, along with restockers, in a fairly steady market.

The NLRS said lamb quality was plainer, with more young lambs lacking finish. The regular buyers attended, but not all operated at capacity and bidding from the major export companies remained limited. The market fluctuated, with prices opening much cheaper than last week before gaining momentum.

Prices for most slaughter lambs over 20kg were $3-$5 cheaper. Lighter weight lambs sold to restockers and to processors for $5-$10 less compared to the strong prices of last week. The old lamb yarding of mostly secondary types in small lot sizes was discounted. The market reached a top of $155 for young lambs estimated to weigh about 29kg cwt — the only sale over $150. Export demand remained subdued and the limited offering of heavy young lambs over 25kg sold mostly sold from $138-$148, or 470-520c/kg cwt. Domestic buyers did not compete on the heavier lambs as in recent weeks.

The lead pens of trade weight lambs, 22-24kg, sold from $120-$135. Some of the early sales were estimated at less than 500c/kg, while later in the market there were prices of up to 560c/kg. The overall price range across the better finished pens of domestic lambs was 517-530c/kg.

Store lamb competition also varied and while there were premiums paid for the bigger lines of well-bred young lambs, most sales back to the paddock were $5-$10 below last week. Buyers from Ballarat and Euroa paid from $105-$120 for bigger framed store lambs, with the general run of light lambs to restockers making $80-$100.

The yarding of old lambs comprised mostly secondary types in small pen lots as tail-end drafts were sold. Prices reached $127. However, most sales were below $110 in the cheaper market.

All grades and weights of sheep were represented. Bidding from meat buyers was at much lower levels, with heavy sheep carrying excess fat being discounted the most. Pens of extra crossbred ewes averaged $25 cheaper, while heavy Merino sheep sold $12-$15 less. Prices for leaner medium weights held on better, although most sales were still $2-$8 cheaper than a week ago.

The NLRS said young lamb numbers continue to increase at Ballarat. Quality was average and more lighter lambs were penned, suiting processor and restocker orders. Most of the regular byers attended, but not all operated fully.

Lambs generally sold to an easier trend, to be from firm to $5 down on last week. Restockers were active on lambs from $85.50-$111, and from $49-$81 for the lighter drafts. Most restocker lambs were a few dollars down on the high levels of past weeks. Restockers also paid from $62-$95 for shorn Merino wethers.

Old lamb numbers continue to decline along with the quality, with the better heavy drafts selling from $105-$120 and up to $130 for a pen of extra heavy lambs. Heavy hoggets sold to $83.

The NLRS said processor demand mainly eased for lambs, but restocker interest was keen. Quality was from average to good for the near regular following of buyers, who were more selective in their purchases.

Most light weight new season lambs went to restockers at $62-$97, though a few larger pens of first cross ewe lambs made up to $159. The 3 score trade weight lambs to processors sold from $88-$125 to average $5 cheaper, but some sales were closer to $10. Heavy weight 3 and 4 scores sold equal to a little easier at $122-$142 and extra heavy weights made to $160. Better quality trade and heavy new season lambs made around 510-535c/kg, while plain to average quality lines sold at about 460c/kg.

The NLRS said nearly 4400 new season lambs were yarded. Quality across the yarding was good, with solid numbers of prime lambs. All buyers were active, but there has been a larger turn-off of lambs direct to abattoirs in the warmer conditions, which affected prices. Prices dropped across the yarding, with light store lamb rates easing, though close to last week.

Most of the ewes were heavy weights and prices fell by close to $10, with the lighter weight and store drafts least affected. Light and store ewes made $30-$57 to be close to firm. The 2 score mutton sold to processors eased $3 to $46-$72, or around 275c/kg on average. Better conditioned ewes, including the heavy weight drafts, sold from $54-$76.50 back close to $13 and close to 250c/kg. Restockers purchased suitable young and mature ewes for $30-$86, with most around $10 easier than the last sale.

Wether prices were mixed, with the heavier bare shorn drafts selling to live export orders for close to $5 less at $85-$100. Lighter wether lamb and store drafts sold for export remained firm to slightly dearer at $75-$96. Wethers with a big skin sold to restockers and feeders for $60-$122 to be firm to $5 dearer. Ram prices remained solid for the young drafts, with ram lambs making $50-$105. Young drafts going to live export and feed made $54-$101. Old rams fell in value, with most selling to processors for $10-$30.