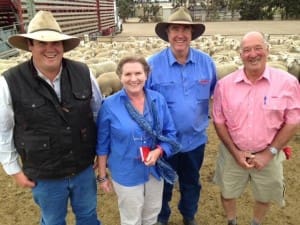 Owen McClure with his parents Jane and Gordon, and Elders agent Ian Button at the Hamilton saleyards on Wednesday.

Prices for well-finished domestic and export quality lambs lifted in all markets, by as much as $8 in Wagga and $5 in Hamilton, despite bigger seasonal yardings.

Pasture and crop restockers and lot feeders from across New South Wales, South Australia and Victoria lifted store lamb prices by as much as $2-$8 in Hamilton, despite agents yarding their second highest lamb offering for the season, making about 100,000 lambs for the week.

The ESDI and national indicators for mutton were unchanged in 327c/kg. 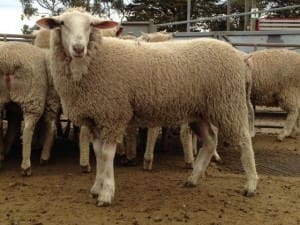 The McClures have been selling lambs off first cross mothers for the past month, with averages lifting $10 a week depending on lamb quality and market rates. Gordon McClure and his son Owen agreed the season was finishing about three weeks earlier than usual.

“We normally sell about now, but usually the lambs are a bit fresher though these have stayed good today,” Gordon said.

“We started selling a week earlier.”

Owen said the mild winter suited the sheep this year and they were happy with the prices so far. They sell all their lambs through the saleyards.

“It is only one draft, we get all the ewes in once and the agents draft them up in here.”

Owen said the prices were the best they had received in about two years. They turn off about 1800 lambs annually, buying in replacement ewes and some Merino wethers for wool production.

In New South Wales at the Central Tablelands Livestock Exchange at Carcoar on Wednesday, the agents yarded 12,900 lambs, 2500 more than last week, and 5775 sheep, 1175 more.

The NLRS said lamb quality was good among most of the unshorn new season lambs, although some were dry in the skin. Trade weights were best supplied and there was a good run of heavy lambs. Lighter store lambs remained in similar numbers. All the usual buyers operated in a market that showed a stronger trend on better presented lambs and easier on the drier unshorn new season lambs.

The NLRS said lamb quality was only fair, with secondary young lambs making up most of the offering. All the usual buyers operated.

Well-bred second cross store lambs were well-supplied and restockers were active over all weights. Store orders were from Albury, Cootamundra, Forbes, Corowa and local areas. New season trade lambs were in limited numbers and sold to stronger demand over all categories.

Heavy and extra heavy export lambs were in limited numbers, with all pens caught in bidding duels as buyers scrambled for supplies. Heavy lambs made from $144-$168.20.

The mutton market sold to steady demand, with prices generally firm to a few cents easier. Trade sheep were well-supplied and sold from $67-$96 to average 326c/kg cwt. Heavy crossbred and Merino ewes sold $2 easier, with most making 304-353c/kg.

In Victoria at the Hamilton saleyards on Wednesday, the agents yarded 54,053 lambs, 257 fewer than last Wednesday.

The NLRS said the Hamilton selling centre was completely full with no room to move as new season lamb supply peaked. A full complement of buyers operated at times throughout the sale and more restockers were also present due to the large yarding.

All weights and condition scores were represented in the offering, including extra heavy 5 score young lambs, medium trade 3 and 4 scores suitable for domestic slaughter and the 1 and 2 score lighter plainer lambs ideal for store buyers.

Prices showed a slightly dearer trend compared to Monday’s sale, with heavy lambs $3 dearer, and the trade weights and light trade lambs also stronger by $3-$5. The store lambs sold firm to $2-$8 dearer at times. Restockers came from the Wimmera, Casterton, South Australia, Albury and Shepparton and purchased lambs between 530c and up to 600c/kg cwt and above at times. The store buyers paid $51-$74 for 1 score lambs and $81-$102 for the 2 and 3 score lines weighing 10-19kg cwt.

The NLRS said lamb quality was average, with young lambs from southern areas making up most of the yarding. Not all the usual buyers attended or operated in a generally firm market, with selected pens a few dollars dearer in places.

At the Hamilton saleyards on Thursday, the agents yarded 11,764 sheep, 1265 more than last week.

The NLRS said sheep quality lifted, especially in the heavy and medium weight Merino and crossbred ewes recently weaned of their lambs. There was also a few pens of overweight crossbred ewes and fewer light 1 score sheep.

The Merino wether offering was also very good, with most in heavy to medium condition. Bidding was steady from a good number of buyers and gained strength as the sale progressed.

Prices were stronger for heavy sheep were $2-$4 dearer. Medium trade weights and light mutton sold firm at the latter stages to be $2-$4 cheaper over the whole market. Restockers were active at times, buying crossbred ewes from $91-$111 and Merino wethers for $80-$97.

The NLRS said the increased yarding due to drying conditions was very mixed in quality. Quality medium weight lambs sold firm to dearer and heavy lambs made to $129. All the usual buyers attended and graziers bid on discounted unfinished lambs.

Light weight new season lambs sold from $59-$95, the trade weights made from $97-$110 and heavy weights $117-$129. Lambs suitable for air freight sold from $68-$94. Store crossbred lambs sold to restockers and feeders made from $5 for immature lambs up to $95 for those almost finished. Merino store lambs sold for $5-$69, depending on weight and quality.

In Queensland at the Warwick saleyards on Wednesday, the agents yarded 1487 lambs and hoggets, and 228 sheep.

In a smaller yarding of lambs and a similar yarding of sheep, the market was fully firm on last week’s rates. The top-priced lambs estimated at 59.7kg lwt sold for $151 for Anthony Wallis, trading as Bathampton Trust of Hannaford.