Processor hunt is on for 18kg-plus lambs 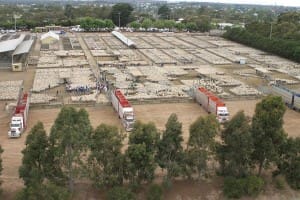 Hamilton’s saleyards were full again today with about 42,000 lambs yarded

Domestic and export processors lifted their OTH rates this week, trying to catch up with saleyard rates and outbid restockers to secure sufficient killable 18 kg-plus lambs in the lead-up to Christmas.

Prices for quality lambs continued to rise in saleyards early this week, as the tightening season intensified competition for the limited numbers of quality trade and export weight lambs available.

After Tuesday’s sales, the National Livestock Marketing Service quoted the Eastern States Trade Lamb Indicator as up five cents to 471c/kg cwt and the heavy lamb indice at 473c/kg cwt, also up five cents. The ES mutton indicator was at 287c/kg, down three cents.

The national indicators also lifted for trade and heavy lambs, but dropped for restocker, light and Merino lambs, and for mutton. The national lamb rates today are: restocker 467c/kg cwt, down 2 cents; Merino 384c/kg, down 6c; light 437c/kg, down 2c; trade 470c/kg, up 5c; heavy 473c/kg, up 5c. The mutton indicator is at 288c/kg, down three cents.

At Hamilton today, lamb prices took another jump despite agents yarding about 42,000 lambs. Kerr and Co Livestock agent Rob Claffey said there has been an oversupply of 18kg cwt and under lambs in previous weeks.

“Now the condition of the lambs is dropping and putting pressure on those weighted kill lambs – supply is getting tight purely based on the season.”

Mr Claffey said more lambs in the Hamilton area have been sold over-the-hooks this year than through the physical saleyard market.

“But the buyers want us to supply lambs for Christmas and the New Year, but producers are belong forced by the season to sell lambs earlier.

“They would just lose all their condition, so we have to sell them now, we’ve got no choice.”

Mr Claffey didn’t expect the supply situation for quality 18kg-plus lambs to improve until grain, lucerne or stubble-finished lambs came back on the market in about 10-12 weeks’ time.

“The dearer ones are more the lighter 13kg cwt lambs.”

Restocker buyers came from the Riverina, south-east SA, Geelong and the Mallee.

“Lucerne, grain, stubble — they are all looking for a quick turn-around; have them gone by the end of January.”

In Victoria, the NLRS said OTH lamb rates were higher week-on-week, with export weight lambs posting the greatest gains due to their limited supply. Mutton rates all recorded lower trends.

In SA, the NLRS said lamb rates across all weight ranges edged slightly higher this week. Heavy weight mutton rates gained around 20¢/kg cwt, due to an increase in demand for good quality wethers, while light and medium weight lines were firm to cheaper.

In Tasmania, OTH lamb category rates are unchanged or higher. Sheep rates were unchanged apart from improvements in heavy and light mutton categories.

Heavy lamb prices up $7 at Dubbo

The NLRS said the fair quality yarding contained limited numbers of well-finished lines. Merino lambs were well-supplied and there was a good selection of light weight crossbreds. All the regular buyers operated in a solid market.

Restockers paid to $109 for young first cross ewes and to $95 for new season lambs to fatten. Hoggets sold to $92.

It was principally a good quality yarding of mutton, with some top lines of well-finished ewes and wethers along with odd pens of plainer types. Light and medium weight ewes were $5 cheaper while the heavy eight ewes were up to $10 easier. Wethers eased by $5. 1 and 2 score ewes sold from $24-$60, while the better 3 and 4 scores sold from $60-$94 for Merinos and $92 for crossbreds. 3 and 4 score Merino wethers sold from $68-$96.

The NLRS said the quality of the lambs was fair to very good. There were twice as many young lambs as old and shorn lambs. The usual buying orders were in place.

Market trends throughout all lamb classes were dearer. Despite extreme heat over the weekend there was increased restocker demand for well-bred young lambs. Trade weight young lambs experienced significant price gains with an improvement in quality and limited supplies. Similar weight old lambs to the trade improved $6-$8.

Some heavyweight lambs were penned this week, but no market comparison could be made as lambs in the category have not been yarded for weeks.

The sheep market showed cheaper trends for a lesser-quality offering. Lower skin values also contributed to some of the price falls.

The NLRS said lamb quality improved slightly from the previous sales, with some good runs of well-finished shorn lambs offered. Most of the usual buyers competed, along with restockers, in a dearer market.

Mutton numbers lifted slightly, although quality remained mixed. Merinos made up the majority of the offering and prices slipped $6-$8. Merino ewes sold from $68-$105. Crossbred ewes ranged in price from $72-$88, and Merino wethers sold from $71-$90.

Heavy lambs to $145 at Inverell

The NLRS said the yarding consisted of a few pens of young lambs, a good supply of old trade weights and more heavy lambs. Young lambs sold to $130.40. Trade lambs held firm, while heavy lambs sold to a dearer trend, topping at $145.

The yarding of mutton consisted of a good supply of ewes and wethers, with several pens of heavy mutton offered. Competition was stronger with wethers selling to a top of $100.80 and ewes sold to $85. Restocker Dorpers sold to $115.

Large gallery of buyers at Hamilton

In Victoria at the Hamilton saleyards on Monday, the agents yarded 34,232 lambs in the first split sale this year.

The NLRS said overall lamb quality and condition was good in the first Monday split sale, although there was not as much weight in the lines offered. A large gallery of buyers attended, with more restockers. Competition was steady throughout the sale.

The sale started with a good line-up of shorn store lambs and they made $59-$89, as the restockers paid from 460c/kg-500c/kg for lambs weighing between 13-18kg cwt. Light 2 score lambs fluctuated but were firm to $3 dearer, with store buyers coming from Bendigo, Swan Hill, Naracoorte, Shepparton, Riverina and local areas.

The NLRS said lamb quality was much plainer this week, with the sale lacking weight and finish, which affected results. All the usual meat companies were represented, although the actual buying field was different due to some regular meat buyers attending the Hamilton sale this week. The market averaged $1-$3 easier on most slaughter lambs, with only four pens making over $130, to a top of $138. With many buyers lowering expected skin returns due to seed and dryness, on a carcase basis the sale was similar to the previous week, at averages of 460c/kg-480c/kg cwt for the better drafts of domestic and export lambs. The sheep sale showed a cheaper trend of $5-$8 for most mutton.

A good percentage of the lamb yarding comprised plain conditioned lightweight young lambs. Restockers from Swan Hill, Finley, Kilmore, Bendigo and Gippsland paid from $76-$86 for the better bred and sized store lambs, while several big lines of very small lambs under 12kg cwt sold at prices $3-$6 dearer, from $50-$68. Processers paid from $70-$88 for most light lambs to slaughter.

Competition for trade and export weight lambs fluctuated, with buyers favouring the cleaner-skinned drafts. Most of the lead pens of young lambs, weighing 23-26kg cwt, sold from $116-$128. The medium trade lambs made $90-$110. Supplies of quality heavy lambs were limited, with only four pens selling over $130, to a market top of $138 for a pen of young lambs estimated to have a carcass weight of about 28kg. Some pens of recently-shorn young lambs displaying good weight and finish sold for up to $121, around 500c/kg cwt.

The sheep yarding comprised a mix of heavy crossbred ewes and Merino ewes of various weights and grades, with only a few lines of wethers offered. Most sales trended $5-$8 cheaper. Most sheep sold in a range between 270c/kg-300c/kg cwt.

Trade and heavy lambs up $2-$5 at Ballarat

The NLRS said another average to good quality yarding of lambs was offered to the regular buyers. Reasonable numbers of trade and heavy lambs were penned, although there was not as much weight in the heavy lambs this week. Big numbers of processing and restocker lambs were offered, as the drier season continues. Competition was strong with the better quality trade and heavy lambs selling from $2-$5 up on last week, with lead lots in their weight categories making slightly over 500c/kg cwt. Restockers and feeders were active and paying mostly $69-$99 for lambs. Lighter drafts made $33-$61.

Sheep quality was average to good, with all weights and grades offered for most of the regular buyers. Well-presented heavy Merino wethers sold to $95. Heavy sheep sold mostly around last week’s levels, with medium and light sheep selling $1-$5 easier with some crossbred sheep more affected.

The NLRS said it was a plain quality offering, as very few lambs with any weight came forward. The usual trade buyers and numerous restockers bid freely during the sale.

The NLRS said prices lifted in most categories among the mixed quality crossbred and Merino lambs, despite the general lack of quality. The limited number of quality lambs attracted strong bidding from the usual trade and processor buyers. Mid-North and Eyre Peninsula agents were keen to secure light weight lambs to feed. A large consignment of Dorper lambs was one of the few that drew subdued bidding.

The NLRS said harvest opportunities dropped numbers considerably. Quality was plainer, with most lambs light weight or in store condition. The small number of trade weight drafts lacked finish. Ewes were of similar quality with some good heavy weight drafts. Competition was driven by the need to secure adequate numbers and all prices lifted with trade lamb prices rising significantly.

Light and store lambs to restockers and feeders made from $40-$82, with most up $4. Light lambs to processors and live export lifted by close to $5 and made $55-$105, while the plainer conditioned wether lambs to live export made from $58-$80. Trade weight lambs sold from $95-$132, with prices lifting by more than $12. The few prime drafts were up to $20 dearer, due to limited supplies.