PRIVACY is the most important issue for sheep producers, Sheepmeat Council of Australia Jeff Murray said after animal rights group Animals Australia admitted it was contacting the former owners of stock sold for live export.

Animals Australia chief investigator Lyn White yesterday said more than 50 sheep, goat and cattle producers will receive letters advising them that their animals were part of Exporter Supply Chain Assurance System breaches in overseas markets during recent religious festivals. Most producers were from Western Australia, but there were also some from South Australia, New South Wales and Queensland.

Australian producers whose addresses can be identified using ear tag numbers and where possible, Producer Identification Code databases, have been told their animals have been involved in breaches and are asked if they want more information from Animals Australia. Ms White believes all Australian sheep and goats should be identified with electronic tags to ensure a level of accountability.

Under ESCAS requirements, Australian livestock must not be sold outside of approved supply chains and cannot be purchased for home slaughter or for slaughter at facilities that have not been approved as meeting international animal welfare standards. Animals Australia released a six-page report and video detailing sheep being bound, stuffed in car boots, slaughtered while still conscious and dragged by their back legs.

Mr Murray said Animals Australia had the opportunity to do whatever they can to attract attention to their issues with the live export of sheep and other livestock.

“But at the end of the day privacy is the most important thing for us as producers I believe, or for the general public for that matter.”

He believed Animals Australia’s actions represented a breach of privacy.

“I would have thought so.

“I can’t see how they would have breached the NLIS database, but many producers – and I know one of my neighbours does – put his property name on one side of the tag and the PIC on the other,” he said.

“So immediately without breaching the PIC database they can identify a property through its name.”

Sheepmeat council leader was found from a tag

Mr Murray said it also would not be hard to do a computer search for a station name and find its location. He also has been contacted by another WA producer who had found a sheep with his PIC number on it, possibly via the state PIC register.

“I guess it is up to the individual producers what they put on their tags and this might prompt some changes around that.

“As for the NLIS database, I wouldn’t have believed that the general public could get hold of information from there.” 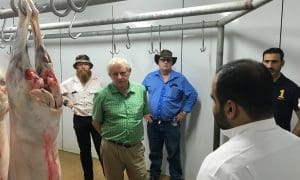 The SCA president said he visited several Middle Eastern countries prior to the recent Eid al-Adha festival, although livestock were being killed.

“We saw all the evidence of what the Australian industry is doing to improve animal welfare, but we didn’t see any of these other things that seem to pop up all the time.

“I’m just not sure where or how they come to fruition.”

Mr Murray thought Animals Australia’s proposal that the federal Department of Food and Water Resources be required to notify the former owners of livestock involved in ESCAS breaches was “a fairly long bow.”

“It would be a complete waste of time and resources, I would have thought.

“I mean at the end of the day, as producers sell their livestock through saleyards, a third could go to live export, a third to the meatworks and a third to another producer,” he said

“So it’s really clutching at straws to suggest that they be spending time and money to get back to individual producers.”

Mr Murray said all producers have the right to sell their sheep wherever they like.

An NLIS spokesperson said there is no evidence that Animals Australia had accessed the NLIS database to get device or PIC information, but each state department is responsible for stipulating the level of PIC information available through state databases to account holders.

“We note some jurisdictions themselves make PIC information publicly available.”

The spokesperson said the NLIS Terms of Use specify that account holders authorised to access details held on the database may do so solely for the purpose of entering or confirming that the details of a movement entered in the database are recorded and correct.

“Any misuse or unauthorised use of the NLIS database represents a breach of the Terms of Use.

“Depending on the nature of a breach, NLIS would work with the relevant jurisdiction to determine an appropriate course of action, which could include cancelling the defaulting party’s account or suspending their use,” the spokesperson said.

On whether the Department of Agriculture and Water Resources would be able to access producer records from the NLIS database to comply with the Animals Australia request, the spokesperson said information is only ever disclosed as stipulated under the NLIS Terms of Use.