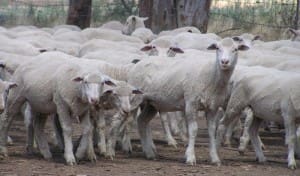 The dry season is restricting the supply of quality heavy lambs in NSW, South Australia and through the Bendigo saleyards, while Ballarat managed to offer more than 30 pens of heavy lambs that sold from $150-$165.

Dubbo stock agent Cleve Olsen said rain, the onset of harvest and lower prices had quietened the lamb turn-off. There no big numbers on properties, although some producers would have a few lambs to sell after harvest.

“If farmers are prepared to feed lambs, they should sell well into the New Year,” he said.

“The numbers are certainly not here, but it is just seasonally driven.”

The ESDI and national indicator for mutton are on 334c/kg, down 2-3 cents.

The NLRS said prime crossbred lambs were in short supply in the mixed quality yarding, which comprised mostly Merinos and Dorpers. Most of the lambs have been shorn. Merino hoggets were also well-supplied. There were fewer store lambs and little restocking activity. All of the usual buyers attended, but not all operated in a firm to slightly dearer market.

The NLRS said lamb quality was fair to good, with a large variation in condition. Light lambs suitable for restockers were well-supplied. Demand for all classes increased.

A good percentage of well-finished medium weight sheep were penned. Market trends were dearer, with ewes as much as $8 dearer in places and the wethers improving by $9. Once again there was some weight-based price change.

The NLRS said lamb quality was similar to the previous sale, with a good run of well-finished heavy and extra heavy lambs penned and some plainer types. The usual buyers competed in a dearer market.

The NLRS said lamb quality remained very mixed due to the dry conditions. There was only a limited selection of well-finished export and trade weight slaughter lambs available in each agent’s run before quality tailed-off into store lambs. Like recent weeks, not all the regular export and trade orders were active.

Prices were $4-$7 dearer for the better finished pens of domestic lambs. However, plainer types lacking fat cover and showing dryness sold at similar rates to last week. Prices reached a top of $147 for young lambs estimated to weigh about 26kg cwt. The dry season continued to restrict the supply of heavy young lambs and there was only about six pens over about 25kg cwt, which sold from $140- $147.

The lead pens of heavy trade lambs sold from $128-$138, while the general run of domestic trade weight lambs sold from $103-$127. Young lambs displaying better carcase finish and potential made 490-530c/kg. However, plainer lambs lowered the overall carcase average to below 500c/kg across the sale.

Demand for store lambs remained very robust, with orders from Sale, Swan Hill, Wycheproof, Wangaratta, Echuca, Yea and the local Bendigo area. There wasn’t a lot of price change for the bigger framed store lambs which sold from $88-$105. However, prices for the smallest and lightest lambs at less than 12kg cwt lifted by up to $14 to range from $60-$79 for most.

The NLRS said the quality of the trade weight and heavy lambs was good and there were large numbers of processing and restocker lambs.

Heavy lambs reached a market top of $165, with more than 30 pens of lambs selling above $150. The usual buyers plus extra northern competition operated strongly, with the better presented trade weight and heavy lambs selling up to $10 dearer than last week. Lighter trade weight lambs sold from around firm to a few dollars better.

The sheep offering included all weights and grades with more heavy crossbreds. The usual buyers group plus some extra competition competed keenly in a market that fluctuated either side of firm. Some of the crossbred sheep trended a little easier, while the Merino sheep in a big skin averaged a little dearer in places.

At the South Australian Livestock Exchange at Dublin on Tuesday, the agents yarded 5799 lambs, 38 fewer than last week, and 1924 sheep, 485 less.

The NLRS said the crossbred and Merino lamb offering consisting of a large percentage of store condition light weights. All of the usual trade and processor buyers bid keenly to secure the few quality lambs available.

The NLRS said lamb quality was again mixed, with large lines of light store conditioned lambs and some excellent weights in the top end of the new season lambs. A significant number of shorn lambs came forward for the first time and these sold to strong competition from the usual trade and processor buyers.

The NLRS said lambs suitable for the trade were in short supply and prices lifted $5-$10 for the few pens of good lambs offered. Restockers were active on suitable lambs and these were firm to slightly dearer. Light store lambs, mostly Merinos, sold close to firm at $15-$63.

Ewe prices were firm to $5 dearer, with restockers strong on all suitable drafts. Light ewes sold firm at $15-$47. Medium weight 2 score mutton sold $2 dearer to processors to average close to $53. Better conditioned and heavy weight ewe drafts made $45-$75 or close to 240c/kg cwt. Restockers purchased a large proportion of the ewe supply for $20-$82, at prices equal to $5 dearer than last week. Ewe hogget quality was plain and restockers paid $20-$78.