Prices hold for quality lambs despite numbers and skin values 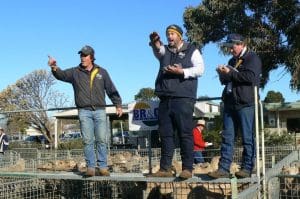 Despite continued subdued demand for skins and a lift in saleyard offerings mid-week, prices for trade lamb prices lifted by up to $10 in New South Wales and Victoria, and heavy lamb prices sold firm to $7 dearer.

After Thursday’s saleyard sales, the Eastern States Daily Indicators for lamb had all lifted, except for restocker lambs, which lost 1 cents to 579c/kg.

Mutton prices were firm to dearer mid-week at most centres, with the ESDI losing 1 cent to 397c/kg.

In New South Wales at the Central Tablelands Livestock Exchange at Carcoar on Wednesday, the agents yarded 7500 lambs, 500 more than last week, and 2100 sheep, 400 fewer.

The NLRS said the damp cold conditions held numbers back on the expected draw. It was a fair quality yarding with odd pens of heavy weights and a pretty good selection of trade weights. There were also the normal runs of lightweights. Most of the regular buyers competed in the solid market.

The NLRS said lamb quality varied in the typical cold winter market. Light lambs were well-supplied and there was strong competition from processors and restockers. Trade and heavy lambs were in good numbers with the better lambs coming off crop and feeders. Extra heavy lambs were limited. Not all the usual buyers operated in the dearer market.

The NLRS said the quality of the trade and heavy lambs slipped, with most pens showing the effects of the harsh winter conditions over the past fortnight. Not all export buyers operated fully or competed in the sheep run, but major domestic processors were very strong on trade and heavy lambs with finish and shorter skins. There were limited store orders, but southern processors were the market drivers over lighter weight categories.

Heavy and extra heavy lambs lacked the weight of the previous week, with some pens affected by the winter conditions. Heavy lambs were generally firm to a few dollars dearer, averaging 688c/kg. Extra heavy lambs sold to steady demand, but one major processor was not operating fully and prices were generally unchanged at $186-$194. There was a limited number of lambs over 30kg cwt which lacked weight and sold from $206-$212.

The NLRS said fewer sheep and lambs were offered to the usual buyers in very cold and wet conditions. Quality was good to average in a stronger, more competitive, market with buyers urgently filling orders as the lamb supply decreases.

Restockers paid $57-$68 for very light 1 scores and $64-$113 for 2 score store lambs, with an extra agent from Ararat active in the sale. Some light weight lambs sold slightly easier. However, light, medium and heavy trade lambs were mostly $4-$9 dearer, especially 3 and 4 scores ideal for slaughter. Carcase weight costs reached up to 700c/kg and higher.

The NLRS said lamb quality was average, with some quality pens of trade and heavy lambs. Most of the usual buyers operated in the dearer market.

At the Ouyen Livestock Exchange on Thursday, the agents yarded 7308 lambs and 2750 sheep.

Quality export lambs were quoted firm to $6 dearer and trade lambs $5-$10 dearer. Heavy hoggets made to $166 and mutton was firm to $5 easier.

In Western Australia at the Katanning saleyards on Wednesday, the agents yarded 3042 lambs, 1191 more than last week, and 1500 sheep.

The NLRS said lambs dominated the yarding, with heavy crossbred lambs selling to $126.

In Queensland at the Warwick saleyards on Wednesday, the agents yarded 1718 lambs and hoggets, and 739 sheep.

In a similar yarding of lambs and a larger yarding of sheep, the lamb prices were quoted as unchanged and mutton was cheaper. The top-priced lambs made $162 for Ellangowan producer Bruce Passmore.