Premiums for style, soundness and low vm in wool markets 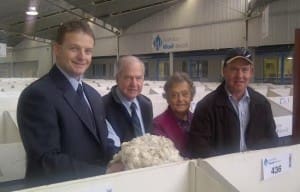 Despite the dollar hitting a five-month low of US91 cents on Thursday, the AWEX Eastern Market Indicator closed the week on 1022 c/kg, down three cents.

However, AWEX said the best style-average spinners types around 40Newtons/kilotex tensile strength were well supported in the 18-microns and finer range.

According to Techwool Trading managing director, Rod Franklin, there are two distinct areas of demand in the market, with the better finer Merino wools going to India and Europe, while the China types were “dragging the chain” on price by comparison. Though there was still plenty of demand for all types of Merino fleece from China.

Mr Franklin said there was definitely a finance problem in China with the country’s tightening of monetary policy and this was contributing to the downturn in China type prices. The falling Australia dollar didn’t help, with the usual Chinese reaction being to reduce US prices, he said.

“If the Europeans weren’t active in the market on those wools, we probably would not have got the 30-40 cents premium we got in the market.”

European interests were very competitive for the sound 16-18.5 micron fleece wools, 38-40N/kt-plus, with low vegetable matter content – no more than 1.5pc – with the best premiums for under 1pc VM, he said.

AWEX said the rapid rise in the market last week failed to spark a longer lasting rally with brokers passing in 14 per cent of the 36,812 bale offering across the Sydney, Melbourne and Fremantle selling centres on Wednesday and Thursday. It was the smallest Sydney sale in four months.

The biggest drag on the market this week was the Merino sector which was quoted lower for nearly all microns, AWEX said. Falls of 10 cents in the Micron Price Guides were common and were up to  20 cents in Fremantle. Despite the overall negativity the superfine range gave some encouraging signs, AWEX said. Buyers were focused on the premium types, which continued to show some price-growth.

Focus on best style types came at a cost

However, the focus on the best style/average spinner and 40nkt types came at the expense of the lower spec types, AWEX said. Part-tender, high mid-break, and some of the lesser styles all lost ground, closing as much as 20 to 30 cents cheaper during the week. The fall in this lower-quality sector, which had found favour during the previous sale, saw a return to the large price differentials between these and the top tier types, AWEX said.

“Merino skirtings were surprisingly well supported given the losses in the lower-spec fleece category.

“The two sectors will, at times, move in unison as processing performance can be similar,” AWEX said.

Most skirting types closed ahead for the sale and selected lots sold above low-end fleece types. Crossbreds had varied results; increasing marginally at the small Sydney catalogue, and slightly lower at the larger Melbourne offering. Merino carding types generally closed in sellers favour, lifting by a few cents for the sale.