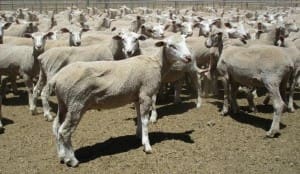 As many centres held their last sales before Christmas, processors and butchers continued their search for well-finished lambs among saleyard offerings, discounting secondary lines down to attractive restocker rates.

In northern Tasmania on Tuesday, a price drop of up to $12 on lambs and $15-$20 for sheep were blamed on the expectation of an offering around 23,000 sheep and lambs at Oatlands on Thursday and a backlog of shipping across Bass Straight.

The ESDI for mutton fell 7 cents to 257c/kg and the national indicator finished on 266c/kg, up 1c.

In New South Wales at the Central Tablelands Livestock Exchange at Carcoar on Wednesday, the agents yarded 9500 lambs, 8000 fewer than last week, and 2900 sheep, 4600 less.

The NLRS said it was a mixed yarding with only a small selection of well-finished new season lambs. Most were young trade weights and secondary lambs suitable for restockers. Most of the usual buyers attended, but only a few operated.

It was mostly a plain quality yarding of mutton with restockers and fatteners operating on most of the yarding. The few prime conditioned ewes and wethers were $5-$10 cheaper. Crossbred ewes sold from $40-$90 and for Merino wethers made to $69.

The NLRS said it was a very mixed quality yarding in the last sale for the year. The usual export and domestic buyers attended, but not all operated fully.

Well-bred second cross store lambs were well-supplied and increased restocker activity helped lift prices higher for well-bred types. Most of the store orders were local, with some competition from Forbes and Cootamundra. New season trade lambs were in short supply and sold to stronger price trends over all categories.

Sheep sold to stronger trade demand, generally $5-$11 dearer. The dearer trend was caused by a large field of restockers who operated over all categories of mutton. Trade sheep sold from $65-82 to average 298c/kg cwt. Heavy ewes made from $66-$88 and mostly sold 258-316c/kg cwt. Sheep returning to the paddock made $26-$98.

In Victoria at the Hamilton saleyards on Wednesday, the agents yarded 37,932 lambs, 14,286 fewer than last week.

The NLRS said quality was plain to very good for the last Wednesday sale for 2015. More light lambs were offered to a bigger field of store buyers. The usual processors operated, but not with as much strength as the earlier market this week.

The best quality heavy lambs sold $2 dearer. Medium trade and light trade weights lifted $3-$4. Light lamb prices fell $3-$5 through the first half of the market, but gradually gained momentum in the second half to end up unchanged to firm, averaging an estimated 495c/kg cwt. The light 2 score lambs made $49-$82.

The NLRS said the lamb yarding’s quality was average to good in the last sale for 2015, with shorn lambs in good condition and well-supplied. Most of the regular buyers operated in a dearer market.

At the Hamilton saleyards on Thursday, the agents yarded 5328 sheep, 12,213 fewer than last week.

Prices were $10-$30 weaker for sheep and there was no demand for rams. Processors discounted some lines, but restocker bidding lessened price falls and they also purchased cheap pen lots. The 2 and 3 score medium weight sheep made $32-$45 and the heavy weight 3-5 scores sold from $42, but mainly made $50-$70. Rams sold from $5-$20.

The NLRS said it was a mixed quality lamb and sheep offering. The usual trade buyers attended and graziers bid strongly on store ewes and also bought discounted unfinished lambs.

Light weight new season lambs sold from $56-$70 and trade weights made $89-$115. Heavy weights made from $124-$130. Store crossbred lambs sold for as little as $5 to restockers and feeders and made up to $94 for almost finished lines. Very light Merino store lambs also sold down to $5 and better quality lambs made to $50.

In Queensland at the Warwick saleyards on Wednesday, the agents yarded 1918 lambs and hoggets, and 359 sheep.

The market was quoted as firm on last week’s rates for a similar yarding of sheep and lambs. The t-priced 65.3kg lwt lambs from Chris and Annie Muir of ‘Glen Elva’, Millmerran, sold for $149.

There was a larger yarding of lambs at Powranna and Killafaddy on Tuesday with a large percentage store lambs. Good quality heavy trade and heavy lambs sold firm, but all other grades were $2-$8 cheaper and almost all store pens were $8-$12 cheaper.

Sheep sold $15-$20 cheaper, with mutton prices at the lowest levels seen at the yards for more than 12 months. Light sheep made $20-$38, medium weights sold from $30-$49 and heavy weight made from $25-$50. The price drop was due to the expectation of around 23,000 sheep and lambs sold at Oatlands on Thursday and a backlog of shipping across Bass Straight. Most works are trying clean up what they have already booked in before the Christmas break, the NLRS said.