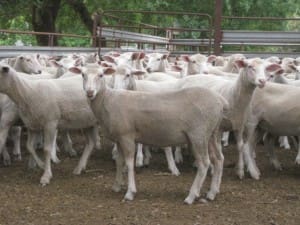 The National Livestock Reporting Service quoted the Eastern States Daily Trade Lamb Indicator as finishing the week on 519c/kg, up three cents, and the heavy lamb indice went up four cents to 531c/kg.

Restocker interest in lambs remained strong with the ES daily restocker indicator up three cents to 515c/kg and the light lamb indice up one cent to 489c/kg. The Merino lamb indicator fell one cent to  448c/kg.

The national trad lamb indicator finished the week on 519c/kg, up two cents, the heavy lamb indice closed up three cents to 531c/kg and the mutton indictor was 318c/kg, up one cent.

Maiden Merino ewes were the biggest movers last week, selling from $88-$141. The top price was for Yarrawonga and Merryville blood ewes in southern NSW with an April skin, she said.

“Strong demand for lambs continued this week, with full clearances of backgrounder lambs offered in all sales.

The NLRS said lamb quality continued to be fair, with a large percentage of the yarding being well-finished. However, there were still a few plainer lines. Heavy and extra heavy lambs made up the majority of the offering. The usual buyers competed strongly in a dearer market.

Trade lambs up to $17 dearer at Cowra

The NLRS said quality was good across all grades. The new season and shorn lambs were very well presented.

Mainly trade and heavy weights were penned, along with more store lambs. Competition was strong from the usual buyers, particularly for the heavy trade weight lambs.

The NLRS said lamb quality remained very mixed and generally plain. Most lamb sales were $5-$12 dearer as the market caught-up to the stronger results recorded in the past week. Three pens of export weight shorn young lambs sold for more than $140, reaching a top of $145. However, the bulk of the lamb offering comprised lighter weight types and sales over $120 were limited.

The bulk of the slaughter lambs were lighter domestic types that sold to very keen competition processing competition from $90-$118, with some of the 18-20kg cwt pens recording the biggest price gains on the day. There were several lines of young Dorper lambs in the yarding and these sold to $112 and averaged over 500c/kg cwt. Light and plainer conditioned lambs sold from $55-$85, with the better lines of young restocking lambs above $80. There was only a limited selection of well finished heavy domestic and export lambs, with most sales from $120-$132 and only a handful of quality shorn lambs out to $145. The best quality slaughter lambs were estimated at 520c/kg-540c/kg cwt.

The sheep market was mostly $7-$10 dearer, with heavy ewes selling from $82-$99.60 and the general run of plainer conditioned types making $54-$75. The good slaughter sheep were estimated at 300c/kg-330c/kg cwt, with odd sales higher. The Shepparton sheep and lamb sale will resume on Friday, January 9, 2015.