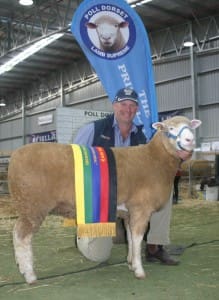 The New South Wales stud, run by the Scott brothers, Joe, 22, James, 20 and Luke, 16, helped by parents Andrew and Donna, is having its most successful year of showing, with a ewe regarded as one of the best to come out of their performance-based program.

Poll Dorset judge Geoff Davey said the ewe paraded well and was “as close to perfect as you can get a ewe”. He liked the well-balanced sheep’s length, hindquarter, topline and wool.

Geoff gave the supreme Poll Dorset exhibit title to a two-tooth ram from the Hillden stud at Bannister, NSW, at Bendigo. But both sheep went through to the interbreed judging where the ewe won out to be supreme shortwool and prime lamb exhibit of the show.

The Valley Vista ewe has won classes at six of its seven shows from Cootamundra to the Sydney Royal, including its ewe lamb class at the 2013 Australasian Poll Dorset Championships and supreme breed exhibit at the Canberra Royal Show in February this year.

The ewe is leading light in the stud’s renewed show effort for the past three years after a six year break, when Andrew was scanning sheep in New Zealand.

The ewe comes out of a selection program that focusses on early growth, starting with an initial weighing at weaning, 100-120 days after birth. Weighing and selection is done at two subsequent 40-day intervals. Low weight gain rams and ewes are culled early and only the sheep at the top end make the show or sire team.

“If they are not doing around 650 to 750 grams a day at weaning they don’t make the show team, depending on the season.”

As a 14-month-old, the stud’s top ewe at Bendigo weighed in at 110kg with an eye muscle area of 35 square centimetres and seven millimetres of fat.

The Valley Vista flock was in Lambplan for several years in the 1980s but now sends Stockscan and liveweight data to New Zealand’s SIL program to guide selection with an index based on muscle, growth and fat. Andrew believes the NZ system’s technique of scanning tissue depth and width to calculate eye muscle area is more accurate and reliable under varying environmental conditions. The stud sells 300-plus rams a year.

“I don’t want any freeloaders, I want to be able to keep good records and make sure they are all performing and paying their way,” Andrew said.

Andrew said the Scott family were also winners outside the sheep show ring last weekend. Joe and Luke played football for the triumphant Eastern Hawks at Wagga on Saturday and James won with his team Burrumbuttock.