THE physical wool auction and forward markets continued their sideways movement this week and all micron groups traded the week within narrow bands.

Clearance rates in the spot auction market remain solid with the pass-in level continuing to stay under 10 percent.

Growers seem to be accepting of these levels in the spot market, but reluctant to commit volume into the forward market.

Trading was light again on the forwards, but spread across microns and maturities. The 19 micron index was again the most traded category, with hedging contracts from March to December.

Over the last month, both sellers and buyers have been searching for a fair value forward level.

Trading levels on 19 micron have varied since January from 1390-1650 cents. With volatility steadying, the trading range has stabilised. Levels for this season look to be settling around 1600 cents for 19 micron and 1300 cents for 21 micron.

The softer finish to the finer wools at yesterday’s auction will likely see buyers a little hesitant, but prepared to look for cover for medium-term orders.

Interest in the Spring and Summer remains, with buyers keen to hedge modest quantities out to mid-2022 flat to cash. 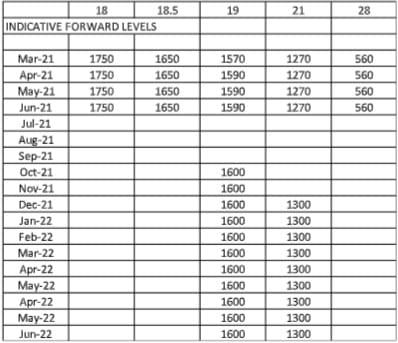