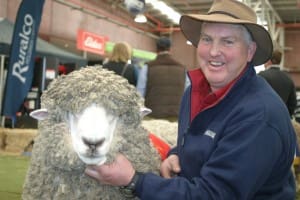 Condah Corriedale breeder Mike Deppeler took just two sheep to Australia’s biggest sheep show last weekend, but he had many more working for him in the ring.

Mike’s two Croydon Stud sheep did well in the Corriedale classes at the Australian Sheep and Wool Show in Bendigo.

But it was the other Corriedales at the show with Croydon blood in them that tell the rest of the story.

The junior, March-shorn and grand champion Corriedale ewe in the show was a one-year-old ewe called Lucy at its first show. The breeder, Bron Ellis, from the Sweetfield stud at Mt Moriac, said the ewe was also by a 2010-drop Croydon ram, bought two years ago. Sweetfield’s winning Sires Progeny Group of three sheep were also by the Croydon ram.

It was only with the senior and grand champion ram, and supreme Corriedale exhibit of the show – Quamby Plains’ three-year-old ram shown by Richard Archer and daughter Victoria Archer of Hagley, Tasmania — that “Croydon missed out on”.

“I was pretty happy,” Mike said. 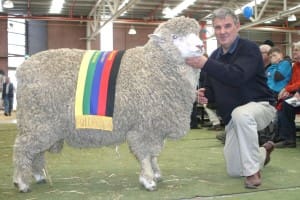 The Archers’ Supreme Corriedale ram, Quamby Plains 270/11, then went on to be the Longwool Exhibit of the 2014 Australian Sheep and Wool Show, winning against the top sheep of 10 other breeds at the show.

“The last time we won the longwool exhibit was 2005.

“He (Richard) was rapt with winning it again,” Victoria Archer said.

Judge Rawlinson said the supreme Corriedale ram was a well-balanced sheep with the best sire’s fleece in the Corriedales.

A strong Trans-Tasman performance-recording theme was also running through the Corriedale winners at the show.

The ram also won the Corriedale performance class and had the highest eye muscle depth of the Corriedales scanned – 39mm. Another Blackwood ram won the August-born class.

“The performance-recording breeders are still taking into account the traditional conformation and wool quality traits.

“The sheep can’t just have figures.”

Quamby Plains and Sweetfield are also members of the PC Group.  The Archers also have young sheep coming on with NZ-blood – the result of swapping semen from Quamby Plains for Strathblane semen from Croydon.

Both the Croydon rams at the show and the sire of the Sweetfield winners were by a New Zealand-bred ram, Strathblane ram 392/10, bought by Mike Deppeler in 2011 after he judged at the Christ Church in the same year.

The Strathblane and Croydon studs are members of the New Zealand’s sheep performance recording program, SIL.