Sheep Central publishes an occasional list of significant recent appointments, departures or achievements occurring across the red meat supply chain, both private sector and government. Details for submissions for future listings are provided at the bottom of this article….

Over the next year he will be utilising his skills in meat science and carcase and live animal assessment working with Teys on developing a progressive approach to valuing beef and sheep meat in the red meat production supply chain.

Dr Ball will play a key role in Teys’ Value Based Marketing and Eating Quality based branding strategies which are key components of the company’s 2015 Strategic Plan. In addition, he will help adapt Teys information systems and key new technologies to better meet the needs of our key customers and suppliers.

Dr Ball has been at the forefront of MLA’s work into genetic improvement, the Sheep CRC and objective carcase measurement. He will continue to be involved in some MLA activities during the next 12 months, working on a case-by-case basis. This will include continuing some involvement with the beef language white paper and OCM. He plans to return next year to a senior innovation role within the industry service delivery company.

Dr Ball’s former role as general manager, Livestock Productivity has been filled by Dr Jane Weatherley, who has spent the past three years as MLA’s manager for R&D communication and extension.

Dr Weatherley has spent the past 18 years working in agriculture R&D, particularly in areas of understanding commercial drivers through the supply chain. She previous served as MLA’s research adoption manager for five years from 2006, and three years as a red meat extension officer with the Tasmanian Government. She takes up her new post on 1 April.

In other MLA appointments, the industry service delivery company has appointed Mary Johnson as its new Communications Manager – Stakeholder Engagement.

Ms Johnson has served most recently as Communication & Stakeholder Relations officer with Cattle Council of Australia. She starts in her new role at MLA North Sydney head office in early March. 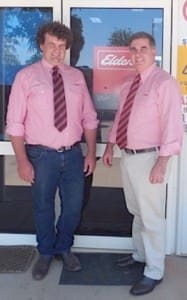 Mr Smith joins Elders in March after three years as wool account manager for Landmark Walgett and comes as a Bachelor of Agriculture and Resource Economics graduate, a qualified woolclasser, and accredited deliverer of the Lifetime Ewe Management and More Lambs More Often programs.

Following the completion of his degree Mr Smith also completed a Graduate Certificate of Rural Science and a Masters in Agriculture (sheep and wool science) at the University of New England.

Mr Smith said that he is looking forward to his next challenge and continuing to service local growers and assessing their needs.

“I enjoy helping growers add value to their business through the delivery of production and genetics advice,” he said.

Growing up on a family farm and getting first-hand experience working on a number of properties has given him a good understanding and passion for Australia’s agriculture industry.

“While we do have some local barriers such as drought and wild dogs, I firmly believe that as these issues are overcome, there is a solid and exciting future for merinos in north west NSW and southern Queensland.”

“Brett’s knowledge and experience will play a critical role in providing expert advice to local producers, offering flexibility and choice in marketing options, as well as preparing their clip in the most economical way possible,” Mr McLeish said.

The Australian Meat Processor Corporation has invested in capable meat industry leaders through the Australian Rural Leadership Program for many years, and the 2015 recipient of the scholarship is young Tasmanian, James Lord. Mr Lord, pictured, is owner/director of the Huon Valley Meat Co, in southern Tasmania. He is an eighth generation Tasmanian who has operated the small processing and wholesaling facility south of Hobart since 2011.

Huon Valley Meat Co has forged strong relationships with dedicated lamb and beef producers and Mr Lord has successfully developed his business to focus particularly on the supply of niche premium red meat products to customers across Australia.

“Participating in the ARLP will provide a great opportunity in developing my leadership skills and will give me the opportunity to collaborate with industry leaders to share best practice and maximise the opportunities for rural Australia and the red meat processing industry,” he said this week.

The ARLP was established in 1992 to respond to emerging challenges for rural, regional and remote Australia. It exists to create a network of leaders with compassion and commitment, strategic thinking and negotiation skills, and the foresight to influence communities, industries and policy-makers into the future.

Mr Buckley earlier spent seven years working within the MSA program, including some years as national operations manager. He started in one of the first intakes of MSA carcase graders.

“MSA was an integral part of my career development, in particular providing exposure to all elements of beef processing and the supply chain,” he said.

William Inglis and Son Ltd has held a long association with rural Australia via its Camden Livestock selling centre and its position as Australia’s leading Bloodstock Sales and Auctioneering business through Newmarket in Sydney and Oaklands in Melbourne.

The 148-year-old company saw it as a ‘logical step’ to take a stronger position in the rural and agri-business asset transaction and sales market. The existing bloodstock business has an extensive range of international clients from the Middle East, Europe, North America, Asia and South Africa and all across Australia, which will provide a strong prospective buyer audience.

Inglis plans to focus its rural property business on broadacre rural and bloodstock properties along with select high-quality ‘rural lifestyle’ assets on the eastern seaboard. The company last month named Andrew Slatter as its new CFO. He joins AA Co from the banking sector where he was regional head of Asian agribusiness for ANZ based in Singapore.

Most of Mr Slatter’s career since 2002 has been with ANZ, in analysts and agribusiness roles. Earlier, he had a five-year stint with Elders which included time in the Elders International meat division based in Japan.

He holds a masters degree in agricultural economics from Sydney U and a Masters in Applied Finance from Macquarie U. He is a 1994 Farm Management Graduate from Marcus Oldham College and a past recipient of the Austrade Asia Pacific Fellowship.

Mr Slatter’s appointment fills a six-month gap since Craig White’s departure, following his resignation last July to pursue other opportunities. An AA Co statement at the time said existing internal resources would manage the CFO responsibilities until a replacement was found.

Mr Cruden, general manager of North Australian Beef Pty Ltd, oversaw the project from its earliest stages in 2012 to its recent completion. AA Co currently has a ‘leadership team’ in place in Darwin, but no clearly-defined general manager for the processing operations. It indicated there was a possibility such an appointment might be made at some future time.

He previously worked as live export manager with Primaries of WA and was Elders livestock sales manager in Tasmania. Earlier still he spent five years as cattle buyer with BE Campbell in Sydney and ran his own agency business for 13 years in Penola, SA.

LRTAQ president returned for another term

Livestock and Rural Transporters Association of Queensland president David Scott has been returned for another term as the organisation’s head.

There was a strong attendance of members at LRTAQ’s  annual conference held last week on Moreton Island, near Brisbane. An industry forum held as part of the program devised an Industry Action Plan which will guide the association’s activities for the next 12 months.

Mr Scott owns and operates Scotts Haulage out of Roma, in the state’s Maranoa district. McDonald’s global chief executive officer Don Thompson officially stepped down from his role on Saturday, after just two-and-half years in the chair.

The McDonald’s Corp annual report filed this week gives a glimpse into some of the reasons for Mr Thompson’s departure, and the challenges that await Mr Easterbrook. McDonald’s is losing sales, customers and market share globally.

Global systemwide sales last year  were $87.8 billion, down 2pc on the year before. But the sales slide may not be the worst problem. McDonald’s saw global guest counts decline 3.6pc, meaning it is leaking customers more than dollars. The National Farmers Federation recently said goodbye to rural affairs manager, Dave McKeon, as he left the peak farm body to serve as GrainGrowers general manager of policy and advocacy.

He joined the NFF in March 2012 as manager of rural affairs. His portfolio at the NFF included R&D, drought policy, telecommunications, transport, farm chemicals and food policy.