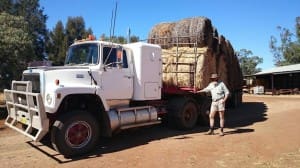 Walgett woolgrower James Foster with a load of donated hay.

Walgett woolgrower James Foster hasn’t had decent rain for almost four years but he and others like him are still fighting.

Driving his old 79 Louisville truck, Mr Foster is now continually seeking cheap sources of feed on the days he is not feeding his sheep.

“This drought here is probably the worst one we’ve ever seen.

“There has been virtually zero break in it and not a speck of green on the ground.”

He has travelled as far as western Victoria and across to Wagga in NSW sourcing hay, grape marc and grain. Recently he helped transport donated hay from farmers at Peak Hill in central west NSW.

“We started feeding back in 2011, but only had to feed for six months.

“We were back feeding again by the middle of 2012 and we haven’t stopped since,” he said.

“My last lambing was 2012 and even then it was only a small lambing – they didn’t join very well.”

Sheep flock had to be halved

“I’m hoping to sell another 500, but you just can’t get the price for them – the buyers come out and offer you peanuts.”

In most cases farmers around Walgett had completely or partially destocked.

“It will be years before they will get up to full production again.

“Probably the biggest thing is that next to no crops have come in for two or three years now,” he said.

“The biggest worry is that we are going to start losing the services in town.”

Mr Foster said areas around Brewarrina, Bourke and Enngonia are also affected by the drought and urgently needs two inches of rain for summer feed and follow-up falls within a week or two. Since April this year he has spent $32,000 on freighting grape marc to his properties Westleigh and Remington.

He has also helped deliver donated hay from Peak Hill to Walgett district farmers for the cost of delivery – about $20 a bale.

Despite a recent downturn in seasonal conditions around Peak Hill, members of the NSW Farmers’ Peak Hill branch have found spare round bales of hay for their north-west counterparts.

“It was a wonderful call to get – I knew farmers in the Walgett region were experiencing severe drought conditions and were in need of fodder.

“The donated fodder was ready to go, but with the absence of government freight subsidies for donated feed, I was not sure how to get it to Walgett.”

Ms Chester said she discovered Mr Foster had been driving around the state and Victoria in a 35-year-old truck buying fodder for his 2000-plus sheep flock.

“Not only did I find a truck to transport the fodder, I also found a truly deserving farmer.”

Mr Foster picked up two loads of donated fodder from Peak Hill and is sharing it with another six local drought-affected farmers in the Walgett district.

“I could use all the hay myself but I feel that I’ve got to get it out to other people as well.

“It’s a fantastic offer from the farmers at Peak Hill who would simply not take anything for it,” Mr Foster said.

“It’s about a 400km trip to Peak Hill on some dusty back roads, but I just take it easy in the old 79 Louisville truck.”

A group of farmers of Peak Hill have also organised for a load of donated grain to be delivered to farmers north of Walgett, with a local freight company in Parkes providing free transport.

“What we’ve had so far has been fantastic – I can’t thank the people at Peak Hill enough,” Mr Foster said.