NEW South Wales graziers have been advised to be on the lookout for pasture dieback among grass pastures after reports of its spread via hay consignments.

NSW DPI research scientist, Suzanne Boschma, said NSW producers should be aware of the spread and impact of pasture dieback which has affected large areas of sown and native summer-growing grasses in Queensland.

“Pasture dieback was first seen in Central Queensland before spreading to the far north and south of the state – it kills grass pastures, reducing productivity.

“The first suspected case in NSW was reported this autumn and we are monitoring the site,” Dr Boschma said.

“Grasses only are affected, with symptoms including yellowing, reddening and purpling of leaves before the plants eventually die.

“The best time to look for symptoms in summer grasses is following significant rainfall, when the plants are actively growing,” she said.

“Dieback symptoms are similar to those of stressed plants and it is important to first rule out other causes, including moisture stress, fertility and herbicide damage.” 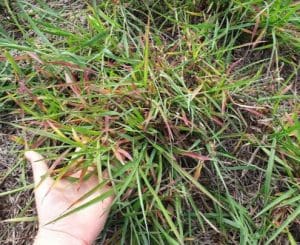 Yellowing and reddening of the leaves of a dieback-affected plant. Image – NSW DPI.

Solid biosecurity is the first step

“There are reports of dieback being spread by hay in Queensland and we advise producers to buy hay from dieback-free areas or hay produced from dieback resistant crops, such as lucerne, store and feed fodder in consistent locations and monitor these areas regularly,” Ms Baker said.

Pasture dieback is a complex issue and ongoing research is exploring the cause of the condition to better inform management strategies.

Researchers are investigating the involvement of a mealy bug, Heliococcus near summervillei, which spends most of its lifecycle underground making it difficult to control.

Suspected symptoms of pasture dieback in NSW should be reported to the Exotic Plant Pest hotline 1800 084 881.