OWNER driver transport operatorss welcomed an eleventh-hour reprieve on Friday night from the introduction of mandatory minimum fixed charging rates, which they say would have made it impossible to compete against larger livestock transport rivals. 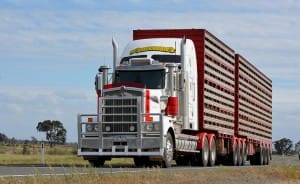 The Contractor Driver Minimum Payments Road Safety Remuneration Order (RSRO), which was to take affect from this Monday, April 4, aimed to impose similar conditions on owner drivers as those placed on employee drivers under union awards.

The new order proposed the introduction of minimum hourly and kilometre payments for owner-drivers, and the requirement that owner driver charging rates include time spent on waiting, queuing to load or unload, on paperwork and on fatigue management rest breaks, as union awards require employers to pay employee drivers.

The order included fines of up to $54,000 for failure to comply.

On Friday afternoon, the Road Safety Remuneration Tribunal (RSRT), after considering more than 800 submissions over Easter, many from owner drivers and transport industry bodies opposing the regulation, rejected calls to delay the introduction of the order, which was scheduled to come into effect from this Monday, April 4.

That prompted a furious reaction from industry groups such as NatRoad, the Livestock and Bulk Carrier’s Association and the Australian Livestock and Rural Transporters Association, and pledges from Queensland Nationals Senator Barry O’Sullivan to introduce a private members bill to overturn the order.

However, the Tribunal’s decision was circumvented late on Friday night when the Federal Court in Brisbane granted a stay against the Contractor Driver Minimum Payments Road Safety Remuneration Order (RSRO), following an urgent appeal by the national industry body NatRoad with the support of the Australian Trucking Association.

The stay means the order now will not commence until a further order of the court.

In submissions to the Tribunal several industry groups, the Transport Workers Union and large transport companies had asked for the introduction of the new scheme to be delayed until at least October this year to give the industry time to adjust to the new payment arrangements.

However, in comments reported by transport news service Fully Loaded, the Tribunal’s president Jennifer Acton said the industry had enough time prepare for the changes given they were first announced in December last year and had been in train since 2012.

She also hit out at the campaign against minimum rates by owner drivers, saying the opposition stemmed from a misunderstanding of the minimum rates scheme. She said many speaking against the changes used few owner-drivers or do not need to comply with the RSRO.

“On the material before us, we are unable to conclude that the 2016 RSRO is, in general, likely to have an adverse impact on the viability of the businesses to whom the 2016 RSRO applies,” she said in her ruling.

“Nor on that material are we able to conclude that the 2016 RSRO is, in general, likely to have an adverse impact on the viability of businesses in the road transport industry.

“Examination and consideration of the submissions which suggested there is likely to be a detrimental impact on the viability of the businesses demonstrated that many of the submissions were based on misunderstandings about the operation of the 2016 RSRO, made by businesses that engage few contractor drivers and/or engage them irregularly, or made by businesses to whom the 2016 RSRO does not apply.”

However, the RSRT says it is still up to individuals affected by the Order to know how they will be affected.

In a media statement, NatRoad CEO Warren Clark said the Tribunal had ignored the genuine concerns of hundreds of owner drivers.

“The decision comes despite more than 800 submissions and three days of hearings over Easter when hirers and owner drivers, summonsed under threat of 6 months imprisonment to give evidence, told the Tribunal that the Order spelled ruin for their small businesses, loss of their homes and devastation of rural communities,” Mr Clark said.

“Rather than pay heed to vast numbers of submissions criticising the ambiguities in the Order and the catastrophic and unfair consequences of imposing a two tiered rate system on the transport industry, the Tribunal has sought to blame industry associations and the Fair Work Ombudsman for any uncertainty and confusion.

“Although hundreds of owner drivers wrote to the Tribunal to indicate that their businesses, livelihoods and family homes were in jeopardy, the Tribunal concludes that it is ‘unconvinced on the material before us that the work currently performed by the contractor drivers to whom the 2016 RSRO applies will be lost to others, including ‘fleet operators’, once the 2016 RSRO commences’.

“To all those owner drivers and small and medium transport operators, whether members of NatRoad or otherwise, we will continue to fight for your businesses and against the injustices perpetrated by the Order.”

The Australian Livestock and Rural Transporters Association (ALRTA) has called on the Federal Parliament to abolish the Road Safety Remuneration Tribunal as soon as possible.

“The Tribunal has decided that owner drivers have no place in the road transport industry and should be regulated out of existence.  This comes in the face of wide spread confusion about the Order and compelling examples of how the Order will ruin small family businesses”, said President Keenan.

“The RSRT was charged with improving fairness and safety.  The anti-competitive nature of the order is grossly unfair.  By their own reasoning, the Tribunal must also realise that placing additional financial pressure on owner drivers is not safe”.

Mr Keenan said that repeal of the Road Safety Remuneration Act and total abolition of the Tribunal is now the only sensible option.

“Safety is the highest priority for every operator – big and small.  The Tribunal has shown time and time again that it is not the right solution to road transport problems.  The process for making the Order stands in stark contrast to good policy development by safety regulators such as the NTC and NHVR.  Witnesses are threatened with imprisonment and intimidated by TWU lawyers into revealing confidential commercial arrangements.  It does not have any true regard for the safety or economic impacts of its own decisions.

“The reports released by the government today back up everything industry had been saying for years.  There is no proof that remuneration can improve safety and the Orders are extremely damaging for the supply chain, the Australian economy the community – especially small regional and rural communities that rely heavily on owner drivers.”

“I call on the Federal Government and the Cross Benchers to recognise the disaster that is unfolding before their eyes.  Repeal of the legislation and total abolition of the Tribunal is now the only sensible option.  The Federal Parliament created this problem and it has a duty to fix it as fast as the system will allow.”

Queensland Nationals Senator Barry O’Sullivan said thousands of family operated transport companies and their customers across rural and regional Queensland could be driven to bankruptcy due to “the radical economic agenda” of the Road Safety Remuneration Tribunal.

Senator O’Sullivan said he is prepared to deliver a private member’s bill to the federal parliament if required to stop the Road Safety Remuneration Tribunal in its tracks.

The RSRO dictates legally binding minimum hourly and kilometre payments for owner-drivers, which will see the cost of delivery increase by 15-30 per cent above the market rate charged by bigger transport companies.

“Basic economics demonstrates that when two products are roughly the same, such as in the transport sector, the lower price wins,” Senator O’Sullivan said.

“This will ruin family run businesses all across the nation and allow large transport operators, and their union workforces, to take more and more market share.

“The tribunal’s order is an insult to every honest business operator and worker in this nation who believes in a free and fair marketplace.”

Senator O’Sullivan said the tribunal was established by the Gillard Government in 2012 as a Statutory Body with the power to make decisions independent of the Federal Government.

As a result, he said the ability of the Turnbull Government to overturn any decision by the tribunal would require an act of parliament.

Katter Australia Party leader Bob Katter also joined the debate, saying that while the stay was welcome, a full removal was still required.

“This new order by the Tribunal renders Australia’s owner-operator trucking companies anti-competitive and hands over the market to the international corporates,” said Mr Katter.

The order imposes a compulsory rate charge via the regulatory rate calculator solely on the small to medium operators who contract to the big corporates.

The mostly international, corporate trucking companies, with a fleet of over five trucks and employee drivers are not subject to the regulatory rate calculator.

There are tens of thousands of trucking operators in Australia who meet the “contractor” definition of the Tribunal.

Joe Kelly in The Weekend Australian reported today that if the changes are introduced, it could cost the trucking industry $2.3 billion.

“We must repeal the Tribunal’s order. It will reduce the nation’s owner-operators non-competitive,” Mr Katter said.

“We cannot afford the risk of pricing out owner-operators from an entire industry! These are Australian owned businesses. This will be devastating on Australia’s trucking industry.”