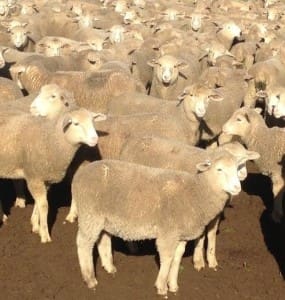 Elders Murray Bridge agent Phil Nagel said between 7000-8000 lambs were expected for the August 24 sale, but “barely 3000” were yarded.

Mr Nagel attributed the lower yarding at the joint Elders and Landmark sale to the early sell-off of large numbers of store lambs and increased over-the-hook selling due to the season.

“I’m concerned that at our next sale (on September 14) our numbers of good lambs are going to be well back.”

The proposed September 14 sale of crossbred lambs could not be brought forward due to the scheduled annual Merino wether lamb sale on September 7, for which producers have booked 9000 new season lambs.

Mr Nagel said trade and heavy lamb prices at Monday’s sale were similar to those at the first sale two weeks ago.

“I thought our store lambs had more weight and therefore sold better than the previous sale, at $90-$105.”

“Trade weights made just over 600c/kg and the heavies were at around 570c/kg, which is line with everywhere else at the moment.”

“There were plenty of good trade lambs in good fresh condition,” he said.

Mr Nagel said new season lambs from drier eastern Mallee areas are dressing out lighter than their liveweights would indicate, with weighed light and medium trade weight drafts coming out at 42-43 percent of on-farm live weight.

“We are just finding we’ve got to weigh a lot of lambs to maintain yield and carcase weight, and not incur underweight penalties.”