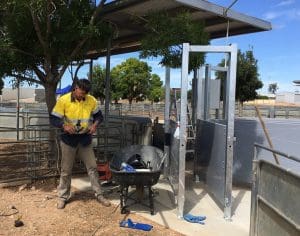 VICTORIA’S first sheep saleyard scanning system has been installed at the Ouyen Livestock Exchange, as the state’s selling centres prepare for mandatory electronic identification of sheep and goats across the supply chain.

From March 31, 2018, all electronically tagged sheep and goats must be scanned or read in saleyards with tag information, and along with the Property Identification Codes of the vendor and purchaser, uploaded to the National Livestock Identification System database.

The Ouyen saleyard aims to begin scanning EID-tagged lambs soon, after last week installing Aleis scanners or readers on four three-way drafts and a single lane scanner for lots that don’t need drafting. The software system is being supplied by Bendigo start-up AgriNous.

The Ouyen system has been costed at about $290,000. OLE chairman Gerald Leach said the State Government had honoured their commitment that the EID implementation be cost-neutral for saleyards.

Mr Leach said he expected the EID scanning and software system would be labour-saving, by enhancing saleyard performance in drafting, penning and cataloguing of sheep.

“This is going to actually be a labour-saving system, not a system that increases the labour.

“It’s going to decrease the amount of labour required.” 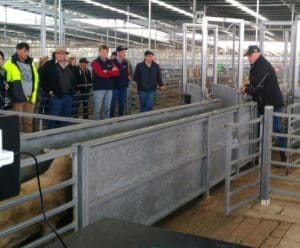 Lanyons auctioneer Warren Clark drafting lambs into the Aleis EID scanners during a demonstration at Hamilton.

The Hamilton Regional Livestock Exchange also moved closer to installation of its sheep scanning and software system with the awarding of a contract for the project on Wednesday.

EID or radio frequency identification device (RFID) scanners will be installed at the saleyards next month after the Southern Grampians Council approved the awarding of a contract to Aleis equipment and installation costing $398,411.20, including GST. Armidale-based company Outcross was awarded the contract for software and hardware valued at $60,858.16.

The council said it was successful in securing funding for the project from the State Government up to a maximum of $460,080 (GST exclusive) under its electronic NLIS (sheep & goats) transition package.

Hamilton is the second largest sheep and lamb saleyard in Victoria, with a throughput of about 1 million in 2016-17. Saleyard manager Chris Dahlenburg said the Hamilton system would include seven three-way draft scanners, some hand-held wands and a lane reader. Work on the associated wifi installation is expected to start next week and installation of the scanners is scheduled to start at Hamilton on March 6.

Southern Grampians Shire Council mayor Mary-Ann Brown thanked the Victorian Government for the significant investment into the Hamilton Regional Livestock Exchange and said it would be a major boost for the region.

“We are proud to be leading the way with EID technology.

“In doing so, we are ensuring the long-term viability of our saleyards, which are such an important asset to our region” Cr Brown said.

“The Hamilton saleyards process almost one million sheep each and every year – making it one of the largest in the state.

“Our redevelopment project is also nearly complete and with an investment of approximately $6.6 million we have created the premier livestock selling facility in south west Victoria,” she said.

Agriculture Victoria’s director of sheep electronic identification Warren Straw said by mid-December 2017, 19 of the state’s 22 sheep saleyards had received funding agreements to install sheep scanning equipment and associated software, or to support the use of a scanning contractor, to scan electronically tagged sheep and upload the required information to the NLIS database.

“Agriculture Victoria is in discussions with the remaining three yards, two of which handle small numbers of sheep.

“The other is CVLX Ballarat, where there is adequate time to install required equipment at their new facility at Miners Rest,” he said.

“In the meantime, CVLX will continue to scan electronically tagged sheep at their existing site by hand.”

Mr Straw said good progress is being made with the installation of EID infrastructure at saleyards.

“Roll-out has commenced, with Ouyen completed last week and a busy schedule of installations to follow.

“Details of that schedule are not yet finalised and are subject to arrangements between saleyard owners and their tag reader and software suppliers.”

All Victoria saleyards are required to begin scanning and uploading data from electronically tagged sheep and goats from sales held from March 31, 2018.