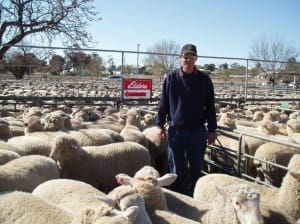 Ouyen is scheduled to hold its first special new season lamb sale for 2014 next week, after cancelling two earlier sales due to lack of numbers.

The centre holds fortnightly sheep and lamb sales until the spring flush of lambs, but had to cancel its first scheduled off-weekly lamb-only sales on August 7 and 21. Seasonal factors, including rainfall in the saleyard’s north-west catchment, and low saleyard prices, led to producers either holding lambs back, or seeking paddock and direct sale options.

The centre’s first specific lamb-only sale for the season is now scheduled for September 4. Ouyen Livestock Exchange Inc. board chairman Gerald Leach said he was very confident that the centre’s weekly sales would go on from now due to seasonal pressure to sell and producers’ re-adjustment of price expectations.

“In fact we are likely to see (lamb) numbers come in quicker if it stays dry.”

According to the Bureau of Meteorology’s (BOM) latest three month weather outlook, covering the period of September to November, a drier than normal spring is expected for central Victoria and central NSW, with only a 40 percent chance the median rainfall level being exceeded.

The remaining mainland Australian states all have roughly equal chances of a wetter or drier than normal spring, with the BOM assigning a 45-55pc chance of above average rainfall. Only Tasmania is expected to receive a wetter than average September to November, with the likelihood of exceeding the median as much as 65pc in the south of the state.

El Niño related weather patterns — including below average rainfall across eastern Australia, above average daytime temperatures and frost events — are likely to continue. For the time being, however, the likelihood of an El Niño developing remains at 50pc, BOM said.

At Ouyen’s sheep and lamb sale yesterday, new season lamb numbers doubled from the previous fortnightly sale for the usual field of buyers, though not all were active.

The livestock exchange reported lambs selling $5-$8 cheaper and mutton $3 dearer than the last fortnightly sale. New season lambs sold to $131 and old lambs made to $125.60. Lighter weight lambs sold well to restockers at up to $83.