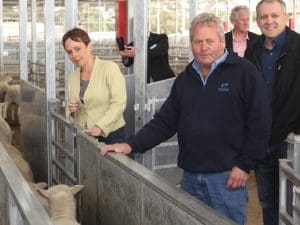 At the Hamilton saleyards on Wednesday, in a “dress rehearsal” for Victoria’s reform in mandating the electronic identification and scanning of all sheep and goats, Ms Pulford reiterated her belief that other states would follow the state’s lead.

“National consistency across the traceability system is really important.

“We have a good (current visual tag) traceability system; I wouldn’t want people to have the impression that it is flawed in a way that is a risk to the industry, that’s not the case, but we just want it to be so much better,” she said.

Ms Pulford said it is only a matter of time before consumers will want to know where there food is coming from, although the benefits of the initiative would be hard for them to see initially.

“It is not hard to imagine that in only a few years from now people will pull their phones out of their pocket, scan their lamb chops and see exactly where they have been in their journey to the store.

“The most important benefit for consumers will be that they will be able to have greater confidence than they already have in the safety and integrity of the supply chain and the food that they eat.”

High level of interest from other states

Ms Pulford said Victoria had a received a “high level of interest” from other states and there was now less resistance to Victoria’s initiative. She said there would be a meeting of all the state agriculture and primary industry ministers with their federal counterpart in May this year.

“We will take that opportunity to provide yet another update on this reform.

“I certainly know that my counterparts in other jurisdictions watch this with great interest,” she said.

“Their departments contact our departments for information about how to do it and we have thrown the doors open, we will continue to keep them open.

“There are some states that are more advanced in their thinking on this; a little bit further down the road in thinking and preparing and planning,” Ms Pulford said.

“But I think it is only a matter of time until other states follow Victoria’s lead, as was the case 13 years ago when Victoria led on electronic tagging of cattle; it took another two or three years until the other states all got on board.”

By March 31, all electronically tagged sheep and goats sold in Victorian saleyards must be scanned at an action level above 80 percent and property-to-property movements of EID-tagged animals must be recorded and uploaded to the National Livestock Identification System database.

Ms Pulford said almost all the Victorian saleyards are now ready to go, with either race or hand scanners, including at Ballarat before it moved to the new Miners Rest location.

She was confident all Victorian saleyards would meet the March 31 deadline and was not concerned about the ability of producers to meet the property-to-property requirements.

Hamilton agents have started scanning lambs, but Ms Pulford expected the system would continue to be refined before the venue’s sale yardings peaked at up to 60,000. 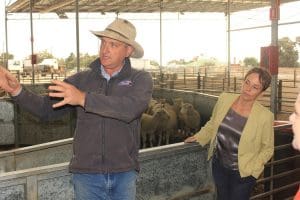 About 18 months after the announcement of the reform and its $17 million transition package, Ms Pulford said the initiative was about giving Victoria a more robust traceability system for sheep and goats for animal disease emergencies, market access and productivity improvement.

Ms Pulford believed what is now known as the in-race Hamilton Draft system, initially suggested by saleyard manager Chris Dahlenburg, with post-drafting Aleis EID scanners and Outcross software, “before too long will be applied nationally.”

Hamilton Stock Agents Association president Bernie Grant said the Hamilton Draft system had been found to be the most effective and efficient and hopefully best way of scanning large numbers of lambs quickly. He believed all the major Victorian sheep yards would be using a similar system

“Today was the first time we’ve used it in a fully functional process and it seems to work well, although our numbers are quite low at the moment, so it is easy to do it now.

“Let’s hope that it can deliver the benefits that they are saying it can within the industry, and it will be good for everybody if it does.”

He was confident the Hamilton Draft system could cope with 60,000 lambs in day.

He said the system’s effectiveness could depend on operator skill and the ability of the software and hardware to “keep up”.

Chair of the Victorian Sheep and Goats Identification Advisory Committee Stuart McLean is confident the Hamilton draft system would be able to handle a 60,000-lamb sale. The extra effort in capturing lamb ID data and automation of lot transfers from producers to buyers at the “front end” of a sale could also lead to lead to gains at the “back end” of the process, he said.