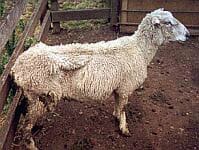 A sheep suffering from OJD.

AUSTRALIAN sheep producers can avoid detection of Ovine Johne’s Disease in their flock, circumventing costly quarantine restrictions in South Australia, by sending mutton consignments to abattoirs not testing for the disease.

In August last year, the Sheep Health Project Steering Committee agreed to make abattoir testing for the sheep wasting disease optional for mutton lines, while retaining inspection for another 19 conditions for all sheep in participating abattoirs, in August 2017.

Despite all peak sheep industry bodies being involved in the decision with representatives on the SHP steering committee, the August decision was largely unheralded among producers until its mention in a discussion paper — Future National Management of Ovine Johne’s Disease — released for the review of the National Ovine Johne’s Disease Management Plan in January this year.

The SHP decision followed complaints from at least one Victorian processor conducting random OJD testing as part of the National Sheep Health Monitoring Project, who was concerned about losing sheep consignments from SA because of the state’s continued regulation of the disease.

SA producers found to have OJD in their sheep through abattoir testing face flock and property quarantine restrictions and trading constraints, which one producer has estimated have cost him $30,000-$60,000 annually in lost ewe lamb sales.

Animal Health Australia’s senior manager biosecurity Dr Rob Barwell confirmed all abattoirs participating in the NSHMP outside SA have been given the option to test all mutton lines for OJD, or do so on request by the producer supplying the sheep.

“OJD testing is only carried out on sheep over two years of age, which make up the minority of sheep inspected in the program.

“One abattoir has chosen to continue monitoring all mutton lines (Cressy in Tasmania), others have opted for doing it on request.”

Dr Barwell said the change meant there will likely be less incidence information on OJD nationally, “unless significant numbers of producers request monitoring for it”.

“For the other 19 conditions that are inspected for, there will be the same amount of disease/condition incidence information.”

Dr Barwell said OJD monitoring is considerably more costly and time-consuming for abattoir surveillance, as samples must be sent to a laboratory to confirm a suspected positive.

“It is also complicated by its notifiability nationally and regulation in South Australia.

“A positive finding may have implications for the producer sending the sheep to the abattoir, when they may not have been aware that this could occur,” he said.

“This could lead to supplier avoidance of an abattoir in future.”

Dr Barwell said producers who want to see whether they have the disease or how their management of the disease is progressing, should have the option of doing so, and hence why the project will continue to fund this inspection and testing when requested.

“There is a project to include a third abattoir, but it has not come online yet. OJD monitoring in SA is a matter for SA industry and the Department to manage.”

South Australian stud and commercial sheep breeder Don Pegler was unaware of the changes to OJD abattoir testing, but said it had the potential to drive the disease further underground in South Australia and increase the numbers of sheep from south-east SA being sent to Victorian abattoirs.

Mr Pegler supported a greater focus on assisting producers to undertake OJD vaccination and testing their sheep to determine the incidence of the disease. He believed there should one system of OJD management nationally.

In comments to Sheep Central, Mr Pegler said OJD is not the problem, rather it is “the way our decision makers handle the disease and drive reporting underground.

“It is one of the very few diseases that has such a small direct commercial financial impact and can be controlled with properly administered vaccine programs which are 90 percent effective.

“The financial impacts are caused by our decision makers rather than the disease itself.”

Dr Barwell said abattoir monitoring requires processor engagement or it will not occur.

“Many abattoirs (sheep, cattle and pork) are now starting to see the value of providing animal health and disease feedback to their suppliers – producers.

“Processors are an important part of the supply chain and where disease information can be collected and returned to producers to allow them to make on farm management changes to reduce its incidence,” he said.

“The only way that the surveillance will be sustainable is if all participants benefit from the improvements that can be made in the productivity of the supply chain from this information feedback system.”

Dr Barwell said AHA has been working with MLA’s Integrity Systems Company on including the NSHMP data in the Livestock Data Link, and an extensive communications effort will be made, now that this is nearing completion. This will include the need to request the extra condition of OJD, if a producer wants it in mutton sheep.

Chairman of the government-appointed South Australian Sheep Advisory Group Ian Rowett and SA’s chief veterinary officer Roger Paskin would make no comment on the issue of OJD management due to the state government being in caretaker mode.