ONCE-BUOYANT Riverina sheep prices were sharply devalued on Friday when a 30,000-strong penning of store ewes and lambs met insipid demand at Deniliquin.

The opening sales of crossbred young ewes were attended by a reasonable crowd of onlookers and got off to a sticky start.

But as the sale progressed to the Merino ewe section the interest progressively wore extremely thin, resulting in some lots failing to reach reserve, including some of the best-presented in the yarding.

Across the day, and with the exception of the wether lamb lots that all traded higher, prices achieved for the crossbred and Merino ewes — young and aged — varied widely, with some holding near-firm value, while others sold $40 and up to $100 a head below Spring sale values. The Nutrien selling team discovered bids were hard to find from the very start of the Deniliquin sale on Friday.

The overriding mood of market participants was one of uncertainty. This was largely due to the supply chain issues currently facing the meat processing industry, although none in this yarding were purchased for, or were destined for slaughter in near or mid-term.

Auctioneer Jason Andrews told Sheep Central he was at a loss with the severity of the price correction.

“We knew values on the box (Auctions Plus) had opened the New Year weaker, but the same confidence that has fuelled cattle weaner sales of late was definitely not evident for sheep here today,” Mr Andrews said.

And in spite of the strong northern season, Mr Andrews said demand for most lines was limited to a radius of 150-200kms to the north and east, while the southern and the demand to the west was at best, patchy.

Narrandera, Wagga Wagga and Albury-Corowa yielded the best of the volume New South Wales buyers, with odd lots also claimed by the Temora, Young and Bathurst.

Southern and western demand was best served by Yarrawonga, Shepparton, Bendigo, Wycheproof, Ballarat, Edenhope and Casterton in Victoria, and Loxton in South Australia.

Nutrien auctioneer Marc Braybon agreed it was a very tough and confusing day.

“We didn’t get the crowd of genuine buyers we had hoped for a sale of this size and there were a good number of agent buyers we rang and said they would come, but never arrived.

“They will kick themselves when they hear this report,” Mr Braybon said. 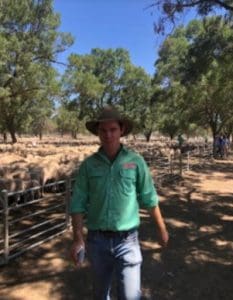 However, by far the strongest and largest support was for the opportunity to purchase some 3500 breeding ewes seized by NSW-based agency, Paull & Scollard Nutrien’s Albury-Corowa branches.

Without any prior firm orders, the business’ young representative Jack Connell displayed great innovative and old-fashioned agency skills to seize the opportunity in the severely weakened market.

“We’ve had good rains in our area and there is plenty of regrowth in our cereal stubbles.

“This opportunity was too good to pass up,” Mr Connell told Sheep Central.

“Our buying card is very full at the moment with few names beside them.

“Hopefully we can place all that we’ve bought on the way home,” he quipped at the conclusion of the sale.

In the opening yard of the sale, a suggested amount of $360 was asked for a yard of well-grown, well-bred, ready-to-join April//May 2021 drop first cross ewes by Womboota Super Border rams from Telko at Mathoura.

Bidding on the November shorn and Gudair vaccinated sheep opened after a long silence at $250 and struggled to close at $298 selling to Ballarat agent, T.B. White and Sons.

The following pen, which were much the same — well-grown, well-bred, ready-to-join and weighing 55kg — made $295 for M.I. Fortuna at Deniliquin with local bidder, J.&L. Dunmore, Deniliquin.

A large consignment of 800 young Kapunda blood first cross ewes, by the Crossley family from Deniliquin was then sold in three drafts. The November shorn ewes by Cadell BL rams made $280, $252 and $248 in pens of about 250 head.

Across this section of the penning, backgrounding lots barely retained their previous Spring valuations and sold from $190 to $250, while two yards of October shorn 2020 drop and 2019 drop first cross ewes each made $340 for Cherla Holdings, Deniliquin.

A feature of the annual January sale was the complete dispersal of the Charinga blood Merino flock of ‘Belubla’ at Tocumwal, following the sale of its 2150-hectare property.

In the joined and unjoined sections of the Merino ewe market, it was difficult at times to ascertain if some sales were completed or not.

A number of vendors, especially those offering joined and/or scanned young ewes, had higher expectations and declined to accept the revised valuations of the market on the day.

Of those to meet the market, Willow Park from Deniliquin accepted $312 for 216 2020 drop Willandra blood Merino ewes joined to White Suffolk rams.

Mutherumbung at Booligal achieved a price of $280 for 2020 drop December shorn Alma Poll blood ewes that were joined to WS rams and Shamba at Deniliquin sold 252 young Spring Plain blood and bred ewes joined to Poll Dorset rams for $222.

Vendors of unjoined or not-station-mated ewes were more forgiving of the revaluations.

By now, the interest from the trailing gallery was extremely thin, as the sale approached the selling of the mature and aged breeding ewes.

Other sales in this section varied from $160 to $200, with several assessed as being below current slaughter value.

The highlight of the day was a better than anticipated demand for wool wethers with an eye-toward the winter slaughter meat market. It was broadly acknowledged prices here firmed $10-$20 on closing Spring valuations.

Most other wether lamb lines were sold with solid inquiry from $112 to $150, with a line of November shorn wethers just off one year-old making $140.