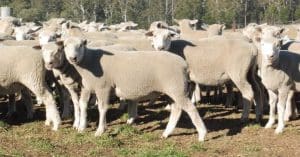 RESTOCKERS competed against processors and live exporters for sheep and lambs listed on AuctionsPlus last week as numbers declined in saleyards after recent rain and seasonal supplies tightened.

Proven first cross breeders sold to $200 for a line of 174 four-year-old mid-January shorn ewes from Balldale in NSW that weighed 72.4kg lwt, were mostly score 4, and scanned in lamb 171pc to Poll Dorset and composite rams.

Top price for composite ewes this week was $184.50 for a line 179 mid-December shorn 2.5-3.5 year-olds from Vite Vite in Victoria that averaged 74.2kg lwt, were mostly score 3 and are scanned in lamb to Cloven Hill composite rams.

The ESDI and national indicators for mutton closed 1 cent higher on 382c/kg.

The NLRS said the quality of the supplementary-fed lambs offered continued to be good. Mainly trade and heavy weights were offered, plus a few store lambs. All the usual buyers operated and competition was strong, particularly for the better finished trade and heavy lambs.

The NLRS said lamb quality was similar to previous sales with well-finished and plainer types penned. Most were heavy and extra heavy weight lambs. The usual buyers competed in a dearer market.