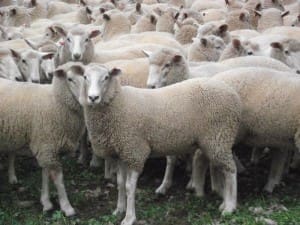 The rainfall cut saleyard offerings in NSW on Friday, keeping prices firm for quality slaughter lambs, while mutton rates lifted. In Victoria at Shepparton, quality trade and heavy lamb prices came back to be equal to the northern levels, while the sheep rates lifted to mostly match the NSW cwt prices.

After the close of saleyard sales on Friday, the National Livestock Reporting Service quoted its national and Eastern States Daily Indicators for most lamb and mutton as firm to slightly cheaper. Restocker lambs registered the biggest fall for the week of 44 cents in eastern states saleyards, back to 530c/kg cwt, with the other categories falling 10-15c/kg.

The national and ESDI for mutton is down one cent at 386c/kg, a 6-cent fall for the week in the east.

“This trend for future breeders followed through to Merino hoggets and young breeders.

The top lot of hoggets was a mob of unjoined full wool Studall blood 52kg ewes from Wallaloo Victoria. Ms Adams said a large offering of proven breeders made $105-$155, averaging $125.

First cross ewe lambs offered ranged from $115-$164, with an average of $142, up $15 on last week. A number of lines of Cashmore Park blood composite ewes offered this week from Hamilton, Victoria, drew buyer interest and averaged $139. The top-priced mob from this feature were five-year-old ewes scanned in lamb to Cashmore Park blood rams that made $157. 222 A line of 222 unjoined Border Leicester-Dohne ewes, 10-11 mths, sold for $165 at Forbes.

The NLRS said quality continues to be good for the fresh trade and heavy lambs. Most of the yarding was trade and heavy weights, with limited secondary and store lambs supplies. Competition was solid from the usual buyers, resulting in a dearer trend.

The NLRS said numbers declined significantly after widespread rain in the drawing. Lamb quality was similar to that of previous weeks, with well-finished and plainer lambs. The usual buyers competed in a market that showed a dearer trend for the quality offered.

The NLRS said quality from plain to good. The extra buyers from last week were missing and this put downward pressure on lamb prices. Three to four pens of trade weight lambs were passed in but all others sold on a cheaper trend. Accurate quotes were hard to compare with the limited numbers in most categories and weight ranges.