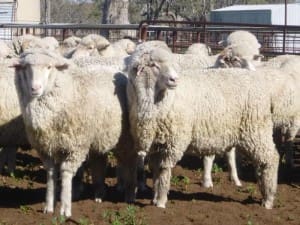 These September-November 2014-drop Merino lambs sold for $91.50 at Brewarrina, NSW, on AuctionsPlus this week.

Rates for old trade and heavy lambs have fallen generally 30-40c/kg cwt this week, with only the better lines of new season lambs making 600c/kg-plus at Carcoar and Wagga in New South Wales.

After Thursday’s saleyard sales, the National Livestock Reporting Service’s Eastern States Daily Indicators for slaughter lambs were all back from 2-10c/kg, although restocker and Merino levels improved with some better quality lines offered.

Sheep prices varied on quality in the saleyards, but the mutton indicators were unchanged with the ESDI at 392c/kg and the national indice on 391c/kg.

In NSW at the Central Tablelands Livestock Exchange at Carcoar on Wednesday, the agents yarded 7900 lambs, 3000 fewer than last week, and 3000 sheep, 200 less.

The NLRS said it was a much plainer quality yarding with a large percentage of tail-end lambs and only limited numbers of heavy weights and trade lambs.

The NLRS said quality was a little mixed, with the well-finished trade and heavy lambs showing good condition, but there were plenty of plainer lambs. There were 2200 new season lambs penned and some larger runs of well-presented Merino lambs. All the buyers operated and competition was reasonable on the trade weights, but eased for heavy weights.

The NLRS said it was a typical mixed yarding for this time of year for the regular buyers, though not all operated fully in the fluctuating market. Better finished domestic trade type lambs, 3 and 4 score, sold to more competition than the plainer medium to light weight 2 scores lambs. There was virtually no store inquiry other than for young Merino sheep.

The NLRS said lamb quality was average to good. Most of the usual buyers attended.

The better presented lambs in all weight categories sold close to unchanged to $4 easier, with plainer types easing $5-$8. The market reached a top of $180. Restockers were quiet, but paid to $129 for trade lambs and from $55-$77 for lighter lots.

The NLRS said it was a very mixed quality yarding of mostly store lambs with some very good lines of mutton. All the usual buyers attended and prices remained firm.

The NLRS said there more store and light lambs at Powranna and Killafaddy on Tuesday. The prime lamb market was firm to $7 dearer, while restockers and exporters battled for their share of light lambs.

The mutton market was cheaper than last week’s extreme rates with one regular exporter inactive. Light ewes made $54-$66, medium weights sold from $84-$95 and heavy sheep ranged from $86-$100.