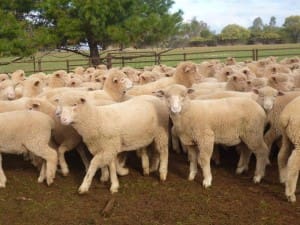 However, most of the early new season lambs have been at good “killable” or trade weights suitable for butchers and supermarkets.

The ESDI for mutton closed firm on 398c/kg, losing 6 cents for the week, and the national indice finished firm on 396c/kg.

“With the correction in the wool market the divide between shorn and woolly sheep has become less pronounced, evident primarily in wether lambs.

“With winter lamb prices skyrocketing and sucker prices showing significant increase on last year, where will prices be heading this time next year?,” she asked.

“At what point will export slow down enough to cause a major price correction?”

Ms Forster said Merino ewe lambs averaged $115 to be the highlight of the breeder lines this week, with grown lambs selling from $80 to a top of $150 for a Moorundie blood line in SA.

The NLRS said lamb quality was similar, with good numbers of well-finished lambs and plainer types. Not all the usual buyers operated in the slightly easier market.

The NLRS said quality was good across the trade and heavy grades. Mainly heavy weights were penned, along with a handy run of trade lambs, including around 700 new season lambs. All the usual buyers operated and competition was solid for the new season and trade old lambs, but a little easier on the heavy grades.

In Victoria at the Shepparton saleyards on Friday, the agents yarded 884 lambs, 408 fewer than last week, and 498 sheep, 98 more.

The NLRS said apart from a few pens of lambs off irrigation, quality was generally very plain and mixed. Not all the regular meat buyers attended, but prices for the better quality slaughter lambs showing reasonable fat and fat cover were firm to dearer on some pens. Demand for secondary lambs lacking carcase finish was selective, and agents passed-in some pens.

The market reached a top of $190 for a small pen of heavy export lambs estimated at about 30kg cwt. Bidding for plainer finished and lighter lambs under about 20kg cwt fluctuated, with most making $77-$114 at varying carcase rates depending on breed type and quality. Odd pens of very small lambs sold at $52-$70, with only odd lots selling to limited restocker interest. A high percentage of the yarded were Dorpers, with the best trade weights making $104-$115.

There was only a limited selection of quality trade and export weight lambs, with the lead drafts selling from $142-$178, or around 580-620c/kg cwt for most. A single pen of extra heavy export lambs topped the sale at $190.

The mutton sale showed a stronger trend, despite the limited numbers. The few better lines of Merino sheep made around 400c/kg cwt, at up to $120 for heavy ewes. The lead pens of heavy crossbred ewes sold from $116 to a top of $131 for Dorpers. The general run of mutton was estimated to cost processors around 360c/kg cwt.